This is the story of two inspiring people, not just one. Their stories are so intertwined that there is no way to tell about one without telling of the other.

Violet Pike was a woman from the Lawn / St. Lawrence area of the Burin Peninsula, Newfoundland, who was instrumental in saving the life of Lanier Phillips, a black US serviceman who had been aboard the USS Truxtun when she and the USS Pollux ran aground at Chambers Cove, between the two communities, on February 18, 1942. 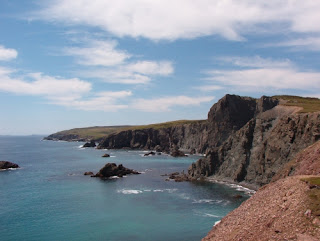 View of the USS Truxtun and USS Pollux wreck sites at Chambers Cove,
with Lawn Point Head in the distance.

Dr. Phillips grew up in the segregated South, being told by his great-grandmother to never look a white man in the eye, for fear of a whipping or even of being lynched.

He was raised by sharecroppers in Georgia, was a mess attendant at the time of the disaster, and later went on to become the US Navy's first black sonar technician. He was later awarded an honorary doctorate from Memorial University of Newfoundland for his work in civil rights in the US. 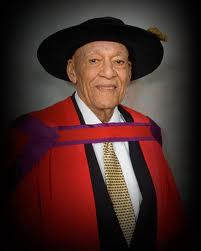 Mrs. Pike (...sadly, no photo that I can find...) was born and raised in isolated, outport Newfoundland, married and had children of her own, and until that day had never laid eyes on a black man.

The story of this disaster, and how these two unlikely people met is a story told on the saltscapes.com website, far better than I could tell it. An excerpt:


"Waves slammed the ship against the rocks. As daylight came and chaos continued he could see the water was thick with oil. Sailors were hurled through the air like rag dolls. Some were dashed against the rocks; others scrambled to safety.

Phillips got into the last life raft, telling his black comrades they would die if they didn't follow. They wouldn't come aboard, petrified they were off Iceland, worried about the lynchings that would surely come. And so they died. But Phillips decided to take his chances.

The raft agonizingly crept toward shore through bitter winter conditions, then capsized. Phillips made it to land, but thought that was it. Then somebody picked him up and said, You'll die if you lie there. "I looked at him, and I saw his white face," Phillips says. "I knew he wasn't an American. I knew he wasn't a sailor. And the accent…"

Memories are fragmented. Up the sheer cliff... onto a pony-driven sleigh. A large blank space. Suddenly awake, conscious on a table. Naked. Sailors covered in oil, black as an outport midnight.

A woman massaging the life back into his cold skin. The first thing he heard her say as she bathed him: This is the curliest hair I've ever seen. "I thought, this is the end of me - they're going to know I'm black." He thought he had survived the shipwreck only to be lynched after all.

The woman, Violet Pike, continued to work at cleaning the oil from his skin. It came off the others; why not this sailor? "I spoke up then. I thought, I might as well let them know and get it over with. I said it's the colour of my skin; I'm a Negro … You can't get it off."

Nonplussed, Pike just kept bathing him. There were kind words. Longjohns for underwear... a bed to rest in for the night. She stayed by his bedside all night, feeding him, tending to him. "I didn't think white people existed with that kind of humane treatment - they could treat a black man like that," Phillips says."

The innocence of this woman, and the powerlessness of this young man... what a touching and inspiring story of two remarkable people that will last longer than any of us.

It makes me smile proudly to know that what Violet Pike did, and will go down in history for doing, is pretty much what ANY Newfoundlander would have done, then or since. Would they have been curious and stared and whispered, I wonder? Absolutely! But I know as sure as I live that the thought of treating Lanier Phillips differently than any other survivor just would not have occurred to them. No way, no how, never.

So, it is with great pride in my fellow countrywoman, and admiration for the later successes of her patient, that I hold up Violet Pike and Lanier Phillips as examples of people who have earned my deep respect and admiration. 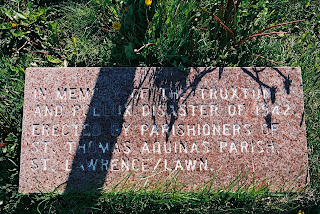 Inscription: "In memory of the Truxtun and Pollux disaster of 1942
Erected by parishioners of St. Thomas Aquinas Parish St. Lawrence / Lawn"

12.March.2012 - UPDATE - It is with heavy heart that I announce the passing of Lanier Phillips today, at his residence in Gulfport, Mississippi, two days before his 89th birthday. He is reunited with Violet Pike once again. Rest in peace.