Over the course of thirty years of nursing, I have crossed paths with thousands of patients in countless settings and in almost as many stages of illness and health. 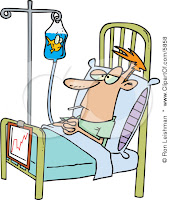 It would be impossible for me to select one single "Patient X" as someone, above all the others, who inspired me. If I were to write about each individual one, I'd have fodder enough for years of posts, not just the 40 days of Lent!

So, the patient of whom I will write and refer to as Patient 'X' is a conglomeration of those who, over the years, have made me laugh, cry, swear, think, excel, dare, pray, blush, hope, wonder, cheer and learn.

I remember Patient 'X' with the two small boys, who fought long and hard, and whose spouse was so hopeful and supportive in the face of insurmountable odds.

Then there was Patient 'X' who asked me to get her "pair o' brae" (bra) from the bureau drawer in her room. That was 30 years ago, and it still makes me smile to this day!

The Patient 'X' with a below-knee amputation, who did not make fun of the silly student nurse who searched high and low for his second slipper.

Patient 'X', whose personal tragedy was played out in such a public way.

Patient 'X' who was brave enough to let me suture his nose laceration, and who was rewarded for his faith in me with the teensiest, tiniest, neatest little scar!

Patient 'X' who swore on me and made me cry. It was not a good day, but those have fortunately been few and far between. It did give me something to contemplate, though perhaps not what he intended...

Patient 'X' and spouse who I would see, week in and week out, who were all there for a laugh, despite the burdens that affected them both.

Patient 'X' who came for his routine end-of-the-offshore-trip blood pressure / blood sugar / cholesterol checks, and would make a point of dropping in to the clinic each Mother's Day, to remind me that I was "Mom" to the crew.

Patient 'X' whose desperate situation at the bottom of a scaffold, on a Rotterdam drydock floor, wasn't making much of an impression on the shipyard "safety" guy, who was telling me and my first aiders to stay away, because we were not from there. HA!! Nice try, you stupid Dutch jerk. I hope my steel toed boot wasn't too uncomfortable...

Patient 'X' with the childlike innocence.

Patient 'X' who sent me flowers.

Patient 'X' who died in the middle of a dirt road.

Patient 'X' who 'taught' me that peeing on a freshly amputated finger stump would sterilize the wound. Yikes! I must confess, I was more interested in fishing his finger out of his discarded work glove than I was in learning that particular lesson.

Patient 'X' who claimed that the 5-gallon salt beef bucket, half-filled with blood-tinged water, was "pure blood", all from his nose.

Patient 'X' who went into cardiac arrest in the chair next to his bed, and in my fright I lifted him, by myself, back into bed. (I was a much younger woman then!)

Simulated Patient 'X' who allowed me to apply whacks of injury make-up to her face, which later would not wash off, and she was going on vacation the next day! Months later, she died in a car crash.

Patient 'X', the homeliest little newborn baby I ever saw, who I loved to bits.

Patient 'X' whose jaundiced eyes I still remember, 20 years on.

Patient 'X' whose family knew when enough was enough.

Every Patient 'X', these few and all the rest, did me the greatest honor and service by teaching me 99% of what I needed to know to be effective in this profession.

I was privileged that they and / or their loved ones entrusted me to play a role in their care, their healing, their passing.

As a mark of respect for that faith in me, Patient 'X' - past, present & future - has a firm hold on my admiration, respect and compassion. Thank you, each and every one.