The Onion is a satirical website which claims to be "America's Finest News Source".

It is a claim I endorse wholeheartedly, especially after having read the following article, brought to my attention by my sister, whose official title is 'Internet Searcher of all Things That Make Obama Look Ridiculous'.

Buddy's 'red line' ought to have been called a 'sooky-little-girl-pink line', for as much of a threat as it has proven to be in the Middle East, and the White House lawn.

But then, there's the Onion, to put it all in perspective. Read on... 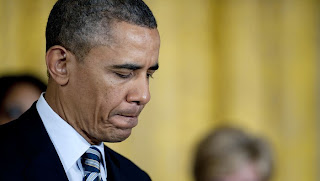 WASHINGTON—Assuring the nation that he was “carefully monitoring the situation,” President Barack Obama expressed his “deep concern” this morning after several hundred Syrian men, women, and children were discovered gassed to death overnight on the White House lawn.

“The use of chemical weapons on the South Lawn, or anywhere on the White House grounds, is unacceptable, and I strongly condemn these actions,” read a statement issued by the president, which failed to acknowledge his previous stern warnings that any poison gas attacks on civilians within 400 feet of the Oval Office would cross a “red line” that would draw an international response.

“We have called on the United Nations to conduct a full investigation of the incident, and pending their findings over the upcoming weeks and months, the appropriate parties will be held accountable. For now, our thoughts and prayers go out to those innocent families down by the south fountain and jogging track who are grieving the loss of loved ones today.”

The latest attack comes more than two years into a bloody conflict on the White House grounds that has seen tens of thousands of Syrian civilians brutally massacred in the Rose Garden, the South Portico, and the Lincoln Bedroom.

I wish I was 1/1000th as good a writer as those at the Onion. Those who can write with such irony, wit and sarcasm, laying bare the blatant hypocrisy for all to see, are people whose talents impress me enormously. And God knows, until 2016 at least, they'll have lots more hypocrisy to expose to the world!