For something I make only once a year, I have to say, quite immodestly, that I do a helluva job.

Here is how they came to be: 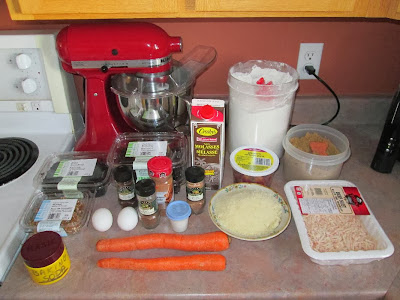 All of the ingredients, ready to be poured, cracked, chopped, peeled, weighed and / or measured. 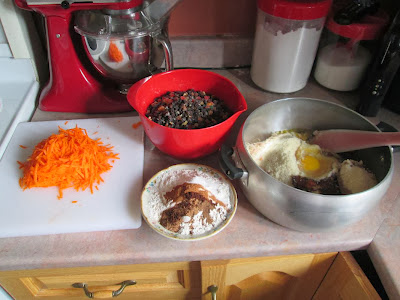 The dry stuff, the wet stuff, the lightly floured stuff and the grated stuff. 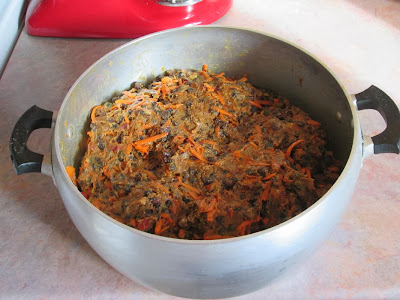 I started out stirring, but soon had to give that up. On went the food-grade gloves, and the hand-mixing commenced.

This pot is very important to the process. It is one of my mother's original set of Wearever pots and pans from when she was married, over 60 years ago. No Christmas pudding would be the same without it. 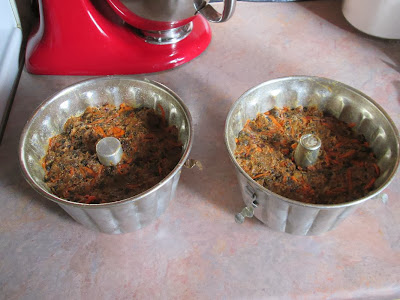 All mixed up, and now all tucked away into the two pudding moulds. Yumminess in the raw.

For the grammar-obsessives out there like myself, be assured that the word 'mold' and 'mould' are interchangeable in all uses, such as a form or frame for shaping or filling, or in reference to fungal growth, etc. 'Mold' tends to be used in the USA while (or 'whilst') 'mould' tends to be associated with the UK. Live and learn! 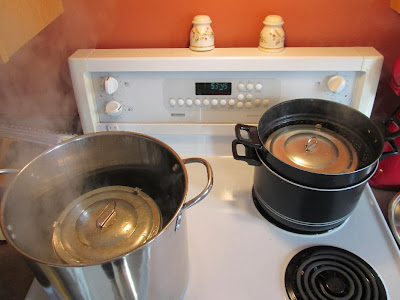 Onto the stove they go, for three hours of steaming. Both moulds have supports underneath so the puddings are not receiving direct heat from the burner. I'd top them up with boiling water from the kettle every 45 minutes, so the moulds stay about 2/3's submerged. Both the moulds and the pots are kept covered throughout. 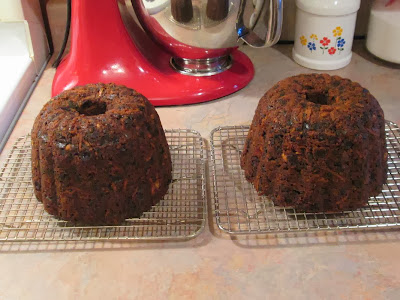 The finished products. Dessert is ready! Except for the brown sugar sauce, of course.

There was a time when I feared they would fall apart coming out of the moulds. That could possibly be attributed to the fact that it has happened, more than once. Not in recent years, but I do admit to acute feelings of trepidation at that fateful moment, even now. The trick, so I've learned, is to ensure they are well-steamed. One of these did not seem as done as the other, so I gave it an extra 30 minutes. The pots I steam them in are different, and I'm sure this makes a difference.

I burned them once, and only once, and that was because I left the burners on 'high' when they were steaming. This is not necessary. Once the water begins to boil (which I allow before I put the moulds in), I then turn down the heat to medium, or whatever setting is needed to allow a slow boil throughout. The water does not need to be at a full, rollicking boil.

I remember once about 10 years ago, it was a horrible, stormy, cold snowy night when I was making my puddings. A perfect night for it! At least it was, until the phone rang, and the next thing I knew, I was on a private jet with my colleague Ian, flying to Florida on a medevac flight to bring two people home to Newfoundland. I didn't know what was going to become of my puddings when I first got the call, they had just started steaming! By the time the flight logistics were worked out, they were whipped out of the pots, out of the moulds, and left to cool while I took off, hoping to get to the Torbay side of the airport to get this flight. One of my many adventures and fond memories, but the only one related to the making of my Christmas puddings!

I'm not sure where I found the recipe, but it has met with my sister's seal of approval. It's not sickly sweet, as so many are. It does not have cherries, which is important to her, but it does have carrot, which is a nice, colorful touch. These will be the puddings I make, as long as I have strength enough to mix 'em!

The recipe is available upon request. I was going to post it, then I thought, "naw". If I made it too easy for people to get, then they mightn't value it as I do. Can't have that!!