Thank GOD there are only 9 more days before the election because honestly? I don't think I can stand much more of the insanity.

The only things that make it at all bearable are the nuggets of parody brilliance that surface from time to time, and the occasional posts on Twitter that reassure me that there are others, many, many others, who see the craziness of the Campaign of Desperation being led by BO, the man with so much arrogance that he named his dog after himself. "Bo". (At least he didn't EAT Bo...) (...yet...)

How ugly, you ask? THIS ugly - 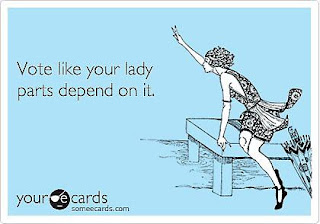 No kidding. This is for real. This was posted on President Obama's website, until the outrage made them remove it:


An Obama campaign official explained to The Daily Caller that the post was taken down because it had not been properly reviewed.

“We have a review process for our online content and this piece did not go through our regular review,” the campaign official wrote in an email. “When it was discovered, it was taken down.”

What, are they a bunch of prepubescent mental cases? In a word, yes.

What made it tolerable, to the point where I almost felt grateful for BO posting it, were the responses on Twitter. A taste of the best of the best -

As the man himself once said, the “future does not belong to those who slander the prophet of Islam.”


Still not convinced? How about this BO ad -

﻿
In case you are in any doubt, the above video is not a joke. Not for one single moment. It's a genuine, Obama-supported campaign advertisement.

Forget 'ugly'. She's friggin' creepy. I could only watch it once, my "first time" AND my last. She looks like a cult member. Her eyes. Creepy. The whole thing makes my skin crawl.
But then, just when I conclude that there is nothing presidential about presidential politics anymore, along comes Steven Crowder, the same guy who made the "Obama Changes" video in my last blog post, to soothe my highly offended soul. Not that his video is any more presidential, but it just proves with perfection how absurd, insulting, arrogant and mysogynistic Barack Obama, with all his garbage about contraception and abortion and Planned Parenthood fictional mammograms, truly is.

So, the moral of this post is... no matter how condescending and unbelieveably awful Barack Obama is, and he is, there are hopeful and brilliant conservative Republicans, and even independents, out there who can mock the madness and desperation, preventing me from descending into it over the next 9 days and 3 hours.

UPDATE - I don't know who Julie Borowski is in the great scheme of things, but she has surfaced with her own Lena Dunham parody. Another work of art! So, without further ado...