"That didn't take long. Exactly 12 hours after the first presidential debate ended, the Republican National Committee has released a new web video that zooms in on what pundits are calling his "smirk" at many of challenger Mitt Romney's lines Wednesday night.

"From the RNC: "Good morning, we're out with a new video 'Smirk' highlighting the president's debate performance where he was visibly uncomfortable as he struggled to give Americans answers on how he'll turn our country around with another four years. As Morning Joe said this morning - it appeared as if Obama thought debating was beneath him." "

But what was equally beautiful was this photo of the Prez and the First Wookie Lady, dying to leave the stage, while Mitt Romney smiles to himself... 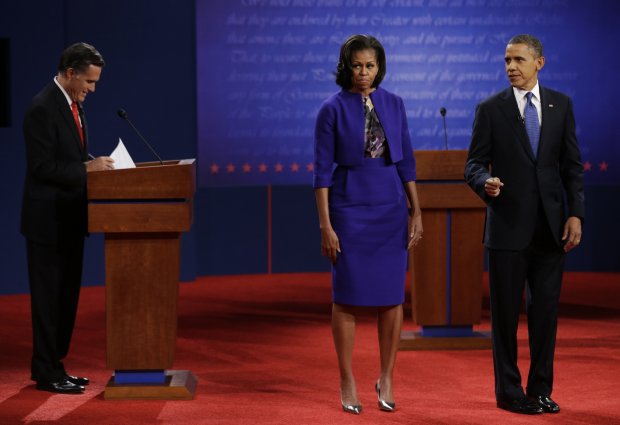 
"This photo from the Associated Press illustrates how the first presidential debate went. President Obama and First Lady Michelle Obama appear a bit overwhelmed as they look for an exit off the stage.

"Mitt Romney, however, smiles as he collects his notes from the podium."

And, as Dennis Miller, formerly of Saturday Night Live fame, observed via Twitter:

I've waited four years for moments such as these. *happy sigh*

Twitter was aflutter last night, as one can imagine. One tweet read something along the lines of "Obama lost the second debate of the night after he got home." Another, noting that it was the Obama's wedding anniversary, stated, "Worst. Anniversary. Ever." Yes, I'm sure it was.

And there's more!! The left's reactions to this first debate are leaving me reeling -

This link to a Jon Stewart interview proves decisively that porcine mammals have avian characteristics and can now achieve altitude.

And speaking of altitude, isn't it just so appropriate that the Global Warming Moron, Al Gore, could come up with this thoroughly awesome excuse for the big O's lame performance -


...and listen to the "objective" media types jumping on it like dogs on a bone. Awesome. So, I guess that means that anyone who flies into Denver (on planes that, incidentally, pressurize their cabins to 8000', not just the 5000' above sea level that is Denver), are mute and blithering idiots. Is that a correct assumption, oh Global Warming Moron? Yes, and hell is freezing over, too. You'd better go check that out.

I saw this clip from the movie "The Blues Brothers" on TV this morning. Sounds like Barackiacs and a laundry list of excuses. Brilliant!!

Keep in mind that Chris Matthews was the person who famously said of Barack Obama, during the 2008 primary debates, “I felt this thrill going up my leg. I mean, I don't have that too often”, on watching Barack Obama speak. I am willing to bet that he was pretty much tingle-free on Wednesday night!!!!!

It was glorious. All of it. I hope and I pray that in 32 more days, I'll have oodles and oodles more examples of the left's implosion, when Mitt Romney and Paul Ryan win this election.