Well, we finally made it across, and into the English Channel. WOO HOO!!

We first sighted land around 3.30 pm our time (11 am Nfld time) Right now we're sailing along the northern coast of France. It was really hazy out today, so the coast had a very eerie look, coming out of the mist. I took a whole whack of pictures, all of which looked like fog, so I won't bore you with those. We slowed right down when the harbour pilot sailed out from Cherbourg and came alongside the supply ship. Got great pix of THAT!! There is now a small tug hooked on to the back of us, and we're continuing on. They tell me that if the haze clears, we'll see the White Cliffs of Dover tomorrow afternoon. 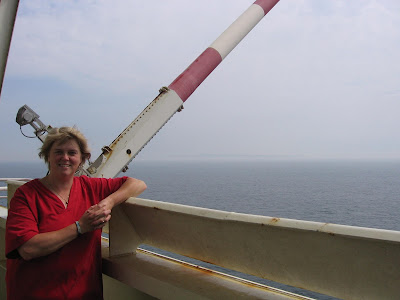 Me with the coast of France visible in the haze. LAND HO!!﻿

Well, Bingo last night was a washout. My slump continues. What a crowd was there! It was a grand laugh. I always used to picture Bingo as more of a lady's game. Not the case here - table after table of big hairy oil workers hovering over their cards, dabbers poised. It's really funny when you think about it! 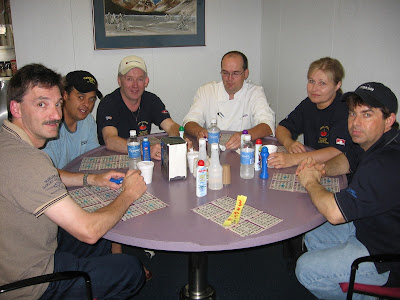 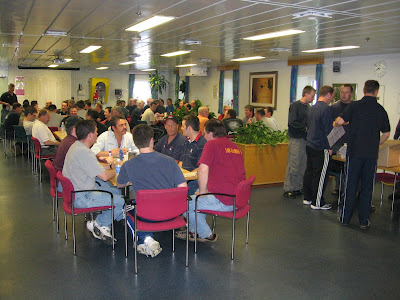 Bingo is a very serious business in the oil industry. No one misses it! 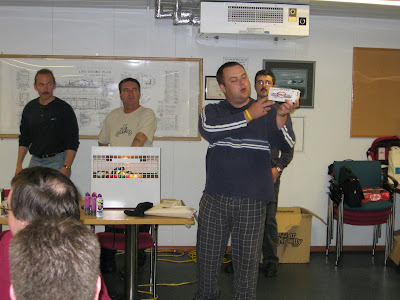 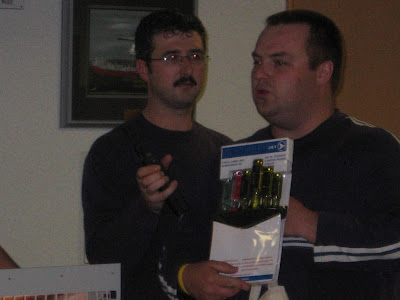 Scott is holding a two-way radio, so those in the Control Room
can hear Bill announce the prizes, Des call the numbers, and they can play too.
NOBODY misses Bingo!
They did draw names out of a hat for everything from ball point pens and chocolate bars to ball caps. Everybody came away with something from those draws. I won a sleeve of three golf balls. I left happy!

My watch battery died about a week ago. Can you believe that? They last two years, usually, which sounds like a lot, until it picks the worst possible time to give up the ghost. Every clock I look at is different. The computers are all still on Nfld time, the ones on the walls are local time, and all that's on my wrist is a white suntan line. Sigh. Coincidentally, the last time I was in Rotterdam, in 1998, the strap on this very same watch broke, and I had to get one of the guys to take it somewhere to get it fixed. This watch KNOWS it's going to Rotterdam!!

Yesterday and today, we've had a couple of unique visitors fly in. Apparently, we've become a pit stop for homing pigeons! Yesterday there was one, now today there's a brace of 'em out on deck. You don't need to ask if I got pictures of them. I been imagining that they belong to Jack Duckworth (...a "Coronation Street" reference for the uninitiated...) 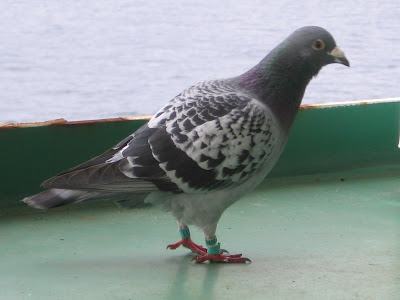 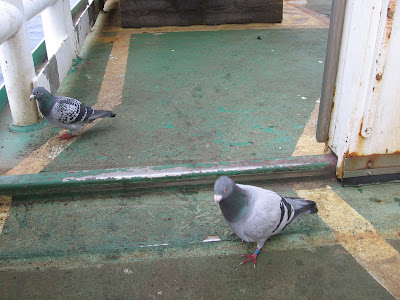 Today's "newsletter" (after all, that IS what this has become, up from a quick paragraph) will include the usual maps, plus a photo of that certificate I mentioned yesterday that we all got for our trans-Atlantic crossing. I'll send another separate email with some snaps I took today. (For those living in the metro St. John's region, brace yourselves for having to sit through another viewing of all these PLUS my PREVIOUSLY UNVIEWED pictures in the not-too-distant future! Bwahahahaha!!! The count as of this evening is 173!!)

That brings this update to a close. Two more days and we'll be at our destination. From what I understand, access to computers and the Internet will be severely limited when we arrive, so I'll send a final "tour report" and then bring this to a close. It's been a lot of fun sending these every day. I hope it's been interesting for you all, too. 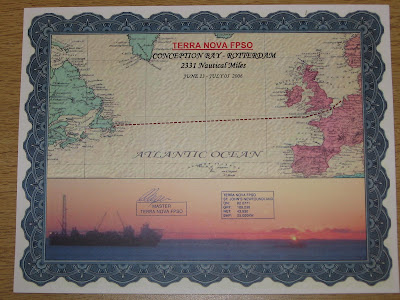 My transatlantic certificate, signed and sealed by Capt. Ed Cooper 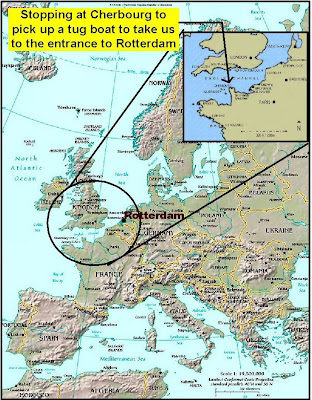 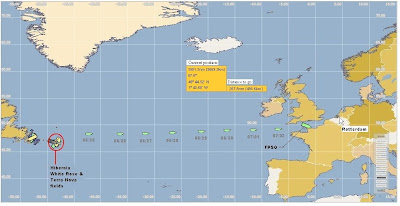 PS - One additional comment - Yes, my hair always looks like a birch broom in the fits when I'm at work. It was wet when I was playing bingo. However, hard hats do not make for dainty 'do's. :-)

On the one with the pilot boat alongside the supply vessel, if you have it way enlarged, you can actually see the pilot about to board.

As she speeds down our port side, you can see a photographer on her bow.


The following are the photos that were sent on in separate emails that day. 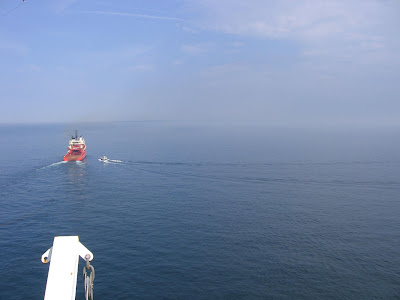 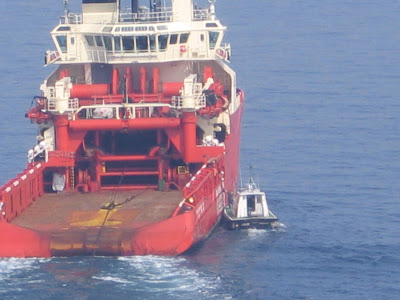 The pilot stepping onto the ladder from his boat to board our supply ship and guide us in to Rotterdam.
Photographer on the bow of the pilot boat.
They circled us a couple of times, then back to Cherbourg, France.
﻿
Don Gillingham, me, Curtis Cook, Shawn O'Leary and Harold Boland, kneeling. 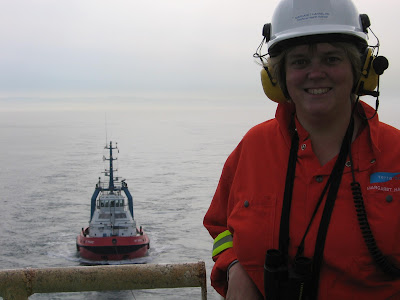 Me back aft, with the tug that's going to push us up the channels to Rotterdam. 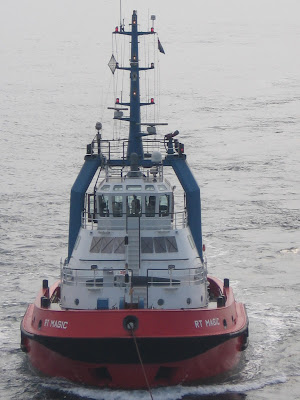