I hope the true blue Newfoundlanders among us took a moment to remember the Battle of Beaumont Hamel today. Lest we forget.

Good day one and all!

Woo hoo!! I am now a fully certified gas monitor. (Insert bodily function jokes here, those of you who can't resist.) I can now take pictures outside, all by myself. I dove right out the door this afternoon and started snapping like a turtle. Snapping like a pea. Snapping like a third of Rice Krispies (along with crackle and pop... get it? Get it?) Snapping like a rubber band. Snapping like fingers. You get the idea I'm sure!

I took a lot of pictures.

I will attach some of the photos in a different email after this one, in case the email size gets too big. On the pictures of me, you will see a yellow box-like thing strung around my neck. I have to have that on and monitoring the air at all times when using certain electronic equipment outside. So, that little yellow thing is what all the fuss was about.

You know when you go on holidays, sometimes, and there are always people snapping pictures and trying to sell them to you later? That's what I was like all afternoon. I took about 40 pictures, then came back to my computer and started sorting through them all, emailing them to whoever was in them, and trying to figure out who some of the people were... I felt like that young missy on "The Love Boat", Julie the Cruise Director. Yesterday, everyone came to me (why ME?) asking how to get set up with Aeroplan to get their points for the flights home. That's the way this job is sometimes, they come to me with all this stuff that has NOTHING to do with nursing, but hey, it's easy, I can help 'em out, they go away happy, and happy people are a good thing!

Well, we can't see land yet. I think people were being a little optimistic about that. Maybe by tomorrow night. We're starting to see more vessel traffic around us now, though, so we can tell we're getting close to somewhere!! 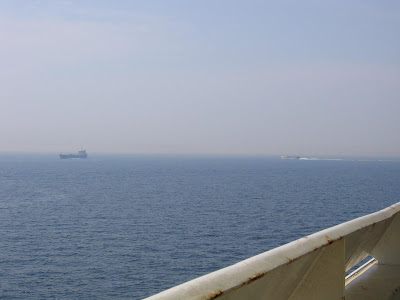 Finally, something to see other than the supply ship! 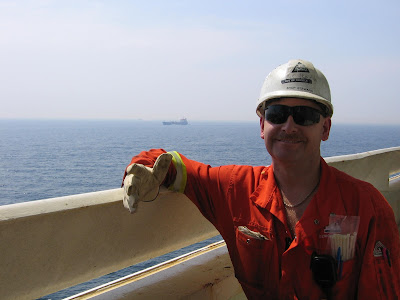 Derick Coles and one of the many ships we were now seeing. 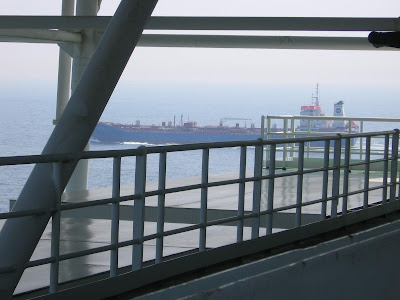 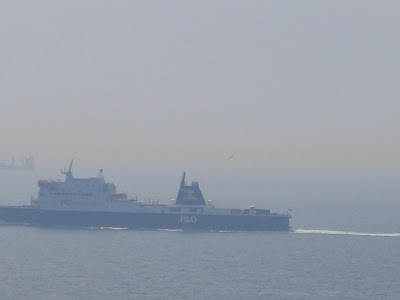 It's a beautiful day today, wherever we are! Sunny, a few clouds, nice breeze, lovely and warm. Ideal for getting out and about.

Well, I'll stop for now, attach the usual maps, and send y'all another email with a few of my snaps. Enjoy!!

Talk to you tomorrow! 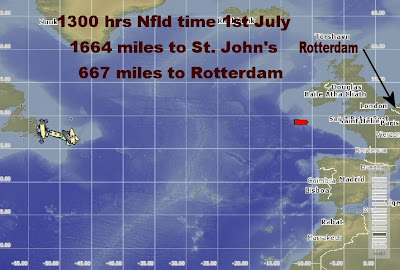 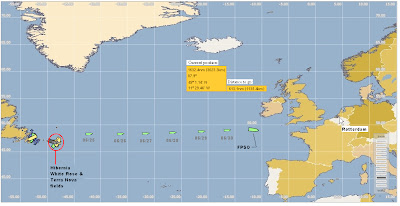 The following are the photos that were sent on in separate emails that day.
Here they are now, with captions: 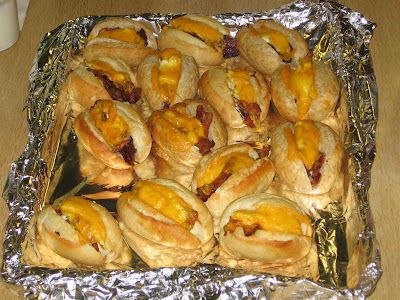 The Bacon Butties.
I added this photo to an earlier post, but they cannot be spoken about often enough.
One of the top 3 things I miss about working offshore! 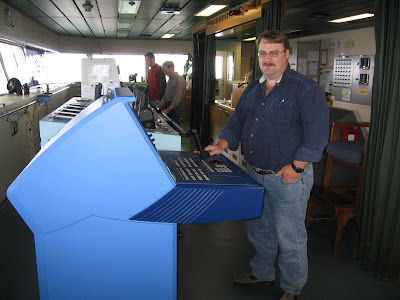 Captain Ed Cooper on the bridge. (One of the top 3 people I miss from working offshore.)
Pat Carew, and a taller young man, a trainee whose name escapes me, are in the background. 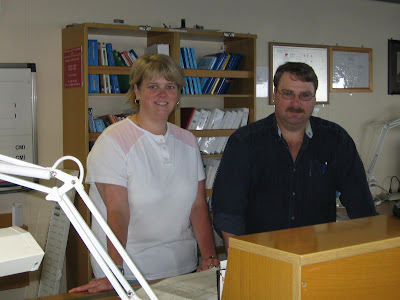 The Medical Officer and the Captain 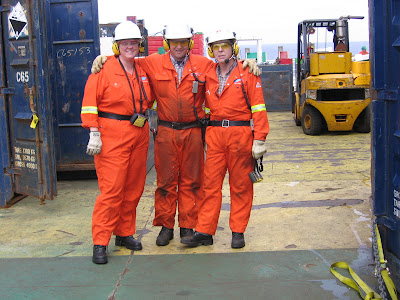 Me (wearing my handy-dandy gas monitor), with Junior Barnes and Pat Carew 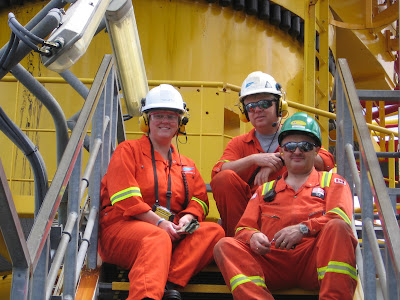 Out for a stroll, finding the b'ys hiding behind the port crane.
Me, Fergus Hayward and Garry Banfield 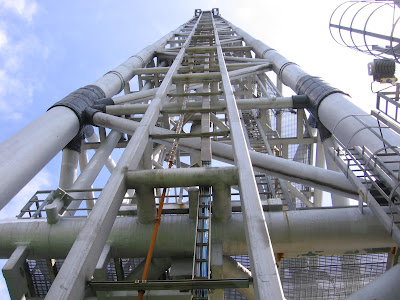 The flare tower, aft. Always wanted to do the climb, but never did. Interesting fact:
If the vessel were sat on the seabed on location, the tip of the flare tower would be out of the water.
Relatively shallow water, pretty far out on the continental shelf. 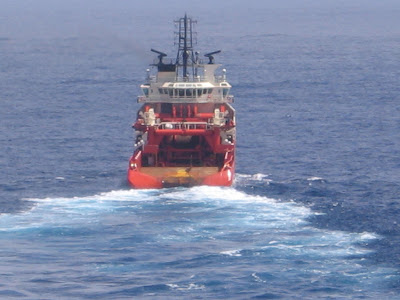 The supply ship towing us. 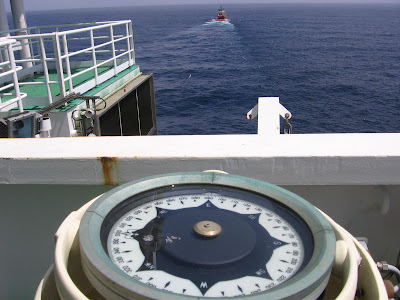 The compass on the starboard bridge wing, showing our heading due east. 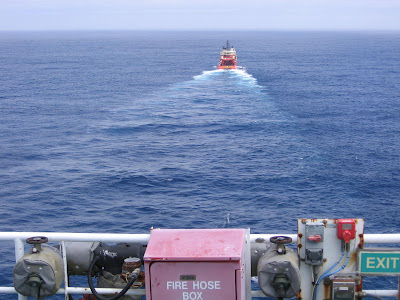 The view from the helideck. 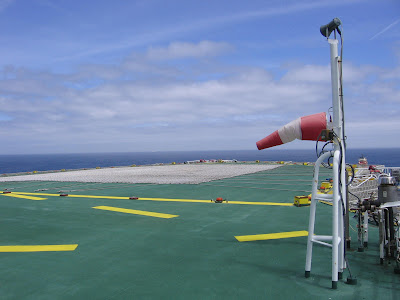 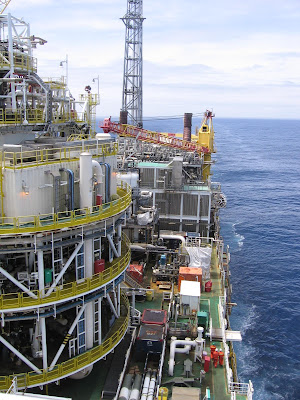 From the helideck, looking port aft. 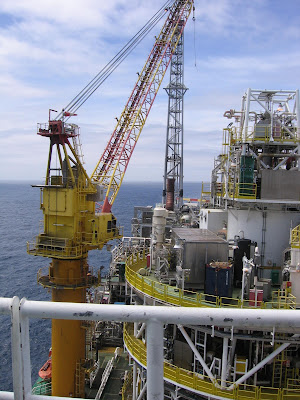 From the helideck, looking starboard aft. 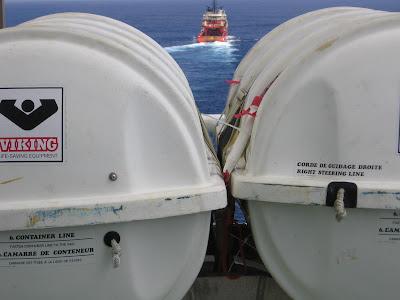 The supply ship was the only scenery, other than water, so there were
lots of photos taken of it. Here, with two liferafts in the foreground.
﻿