At 1 am this morning, Wednesday, (8.30 Tuesday night, Nfld time), two helicopters landed on our helideck, one with 4 harbour pilots on it, the other with about 7 linesmen who were going to handle mooring the ship once we arrive at the dock. I was asleep and missed all the fun. By 2 am, we had made a right turn from the English Channel into a series of channels that brought us into Rotterdam. When I got up at 5.30 am (1 am Nfld time) we were creeping along these channels, which are like narrow rivers. It took from 2 am to about 1 pm before we reached the dock, and even now, at 6.30 pm, they're still getting her moored. She's a big boat!

I had a chance to talk with a few of the linesmen. Nice bunch of guys! It was a new experience for them having to fly by helicopter onto a ship to do their jobs. They usually just hop aboard or up a short ladder or gangway from a tugboat to the boat their working on, but this one is just too big to do that. 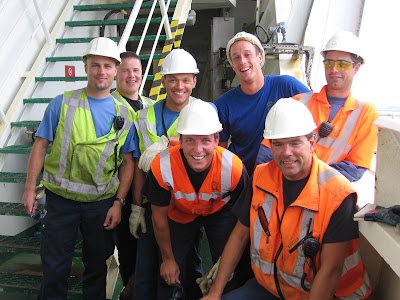 The Rotterdam linesmen, above, and with some of our own crew, below. 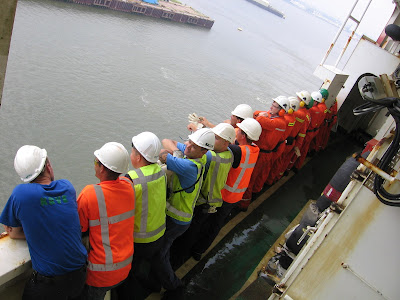 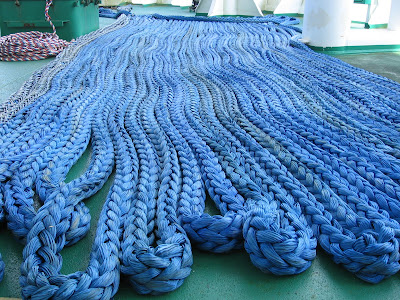 The mooring line that will keep us snugged up to the dock. 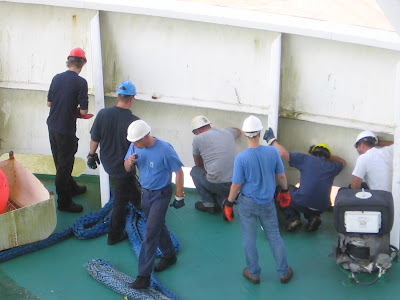 The linesmen on the bow, working hard, until... 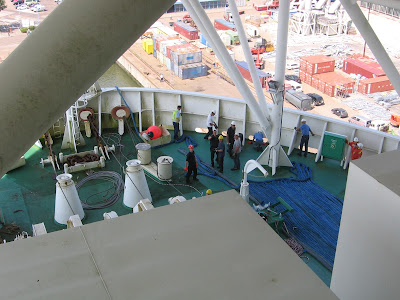 ...I st﻿art yoo-hoo-ing to them!
I'm amazed at the amount of vessel traffic, big and small, that goes through these channels. There's a steady stream, fast and slow, of every shape and description. Our trip along was very slow. You could throw a rock on either side and hit land. It wasn't particularly scenic, though. It's a very industrialized area, all along these channels. Not a windmill or a wooden shoe to be seen! 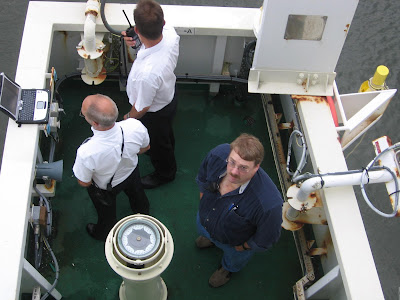 Captain Ed Cooper with the harbour pilots on the bridge wing, docking the ship.
(Giving me the evil eye for spying on them from the helideck!) 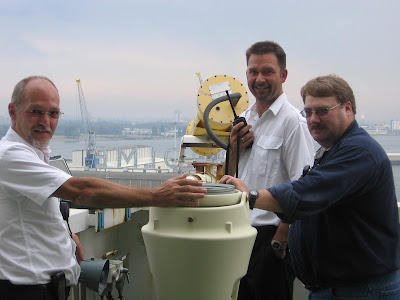 I got very brave, and went to join them on the bridge wing. Very nice people!
The dock where we are tying up had to be dredged out to accommodate a ship of this size. In fact, the Skipper himself told me that we have 1 meter (3 feet, 4 inches) of clearance between the bottom of the ship and the bottom of the dock. That's incomprehensible to me, how they can do this with such a narrow margin. No wonder they put a protective plate under the turret before we left!

At about 8.30 am, we finally disconnected from our tow ship, and about 5 or 6 tugboats took over pushing us along the route. I was out on deck when the tow ship passed along our port side, heading back out to sea. All their crew were out on deck, taking pictures of us as we were taking pictures of them. Unbelieveably, I was actually outside doing REAL WORK, and therefore didn't have my camera with me, so I missed that Kodak moment. I waved to them, though, and they all waved back. They're gone to do some short term work in the North Sea until we're ready to sail back to Nfld. It was sad to see them go, in a funny sort of way. 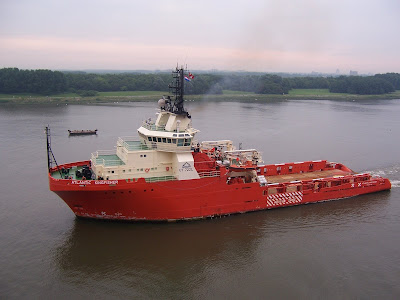 Our supply ship, leaving us for the North Sea. (Someone else's photos.) 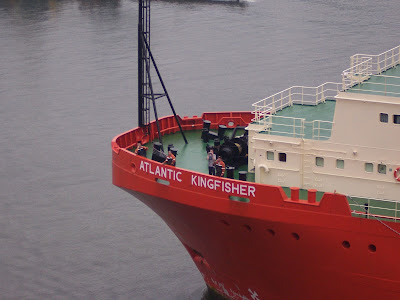 Some of their crew, on the bow, waving goodbye.﻿

It was really hot, humid and heavily hazy this morning when I was out and about. Just after the supply ship sailed away, the heaven's opened! I haven't seen it rain that hard in a long time! Then the thunder and lightning came, but within about a half-hour, it had stopped. It got sunny after lunch. Having to wear coveralls over jeans and a t-shirt is yucky when it's so warm.


There are immigration officials on board now, too, who had to stamp everyone's passport. Later tonight, a gangway and stair tower will be erected. Tomorrow we'll actually be able to go down on the dock, and go in to town after work if we want. On Friday morning, 81 of the 120 on board will go to the airport and fly home. The rest of us will go check into our hotel / resort Friday after work.

So, all in all it's been a pretty exciting day! Not to mention an adventurous 13 days all together! It seems like I've been sending these emails for ages, but I guess this will be the last one now, now that the trip is over. Maybe a little update from time to time, but no more maps to send after today, I'm afraid! (...unless, of course, I'm lucky enough to be here for the sail back...!!!)

Well, take care, everybody! It was great having you along for the ride with me!! Now it's down to work for the next week, until I get to go home on the 13th. Keep in touch, and let me know what's been going on with y'all, too!

PS - Just an update from yesterday's email. No, I will not be working nights (hallelujah), and no, we did not end up losing power like we thought we might once we left the English Channel! It all worked out just fine! 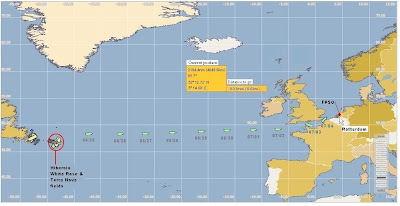 So, that's the end of this part of the story from seven years ago. We were in Rotterdam until September, 2006.

During my stay there, in three-week stints, I had the opportunity to do and see a lot of things. Seeing the FPSO in a dry dock, and being down on the floor of that dry dock, was astonishing. I will post some excellent photos from there on another day.

My sister came across to Amsterdam just as I was finishing one of my three-week hitches, and we spent a week travelling around Holland. A wonderful holiday. If it wasn't for the work-related drug tests, we just might have enjoyed ALL that Amsterdam's "coffee shops" had to offer! :-)

I'll post some photos from the holiday here on another day, too.

Well, my emails from that sail are here now, for posterity. A little snapshot of my offshore life, a life I enjoyed very much.

Thanks to those of you who visited here to read these posts over the past 13 days. I hope you enjoyed the trip! I am planning to do the same thing in reverse in September. As it turned out, I WAS lucky enough to do the sail back to Newfoundland, as well!! A thrill, indeed! And of course, the newsletters started again, so I will be posting them here, for sure!

So, until September, bon voyage!! 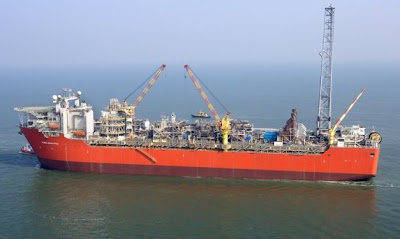