Here are two illustrations of our location as of 3 pm Nfld time today. One gives nautical miles gone and left to go, the other gives a better idea of where Rotterdam is. 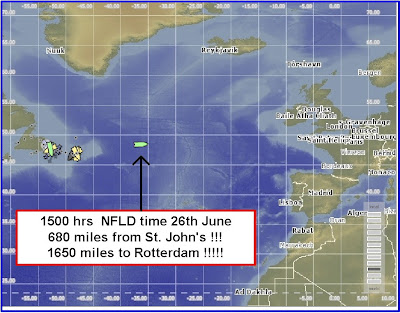 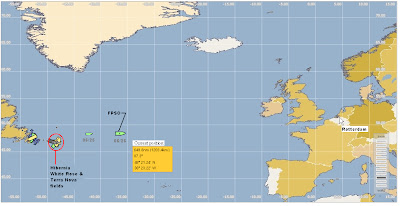 A new map, courtesy of our Instrumentation Tech.

I've got a bunch of photos taken, but they're mostly of people you won't know, so I'll whittle out a few of interest and send them on later.

It's still foggy, but there are occasional glimpses available of the supply ship towing us. Apparently, we are contributing to the effort more than I thought... we're providing 180 tons of push and the supply ship is giving 80 tons of pull. That's how *I* understand it, anyway. :-)

We're about a third of the way there. When we get near France, a pilot boat from Rotterdam will come alongside and a pilot will board, who will take us for the last two days into the shipyard. From what I understand, tugs from Rotterdam will be providing the push / pull at that point, and the supply ship will sail away into the "spot market" to do work here and there in the North Sea while we are getting our facelift.

We did our second time change today, so now it's two hours later here on board than it is in St. John's. We had to do this time change in the afternoon, because some of the natives got restless about the night people getting the 11-hour-shift benefit all the time, and not us poor slaving day people. Geez!

We are now out of helicopter range, which makes my existence here a tad more exciting and sleepless. My hands are cramped from keeping my fingers crossed, hoping no one gets seriously hurt or ill. An Ave or two along those lines would be much appreciated!!

Well, that's it for the Day Four Report!! I'll be in touch again soon.

Love and kisses to all!