Sailing, sailing, over the bounding main...

Well, things are not so problem-free today, I fear. Something broke earlier, which slowed our progress down from 8 knots / hour to 4 knots / hour. Some kind of a generator or something went kaput. This does not concern me. As long as the boat can float, the rest are mere details. And she's floating fine, thank you!

I was just told that whatever broke is now fixed, so we're back up to 8 knots, cruising along. Not quite water-skiing speed, but it's getting us where we want to go!

We had a General Platform Alarm last night around 7 p.m. Fortunately it was a false alarm, as most of them are. My first thought was that someone was hurt, but fortunately, all was well. It certainly got people thinking about how far from land we are, and they'd better be working safely.

Today is the best day weather-wise so far, and it is a good one! Beautiful warm breeze, not stifling hot, but somewhere around mid-70's I think. I went out for a long walk this afternoon. Well, it wasn't long in a straight line, or I'd be very wet! It was long in a zig-zag, back-and-forth, front-to-back-to-front kind of way! Hehehe...


Some of the people and things I saw that day...
﻿ 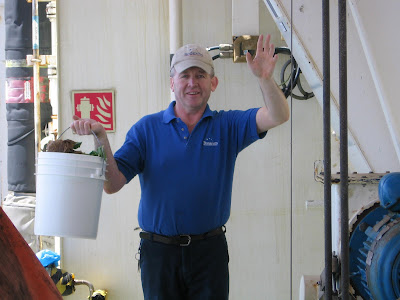 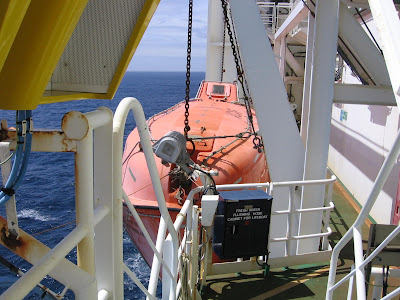 Starboard lifeboat - thankfully I only ever saw the inside of it during drills. 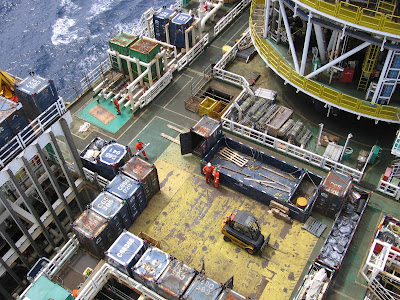 The "laydown" area. Not to be confused with somewhere you'd go to nap.
See the two orange people right in the center?? 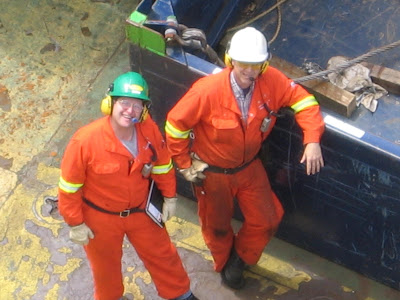 ...here they are up close, taken from the helideck looking down.
I had to do some screaming for them to hear me!
The guy on the left is a visitor whose name escapes me. The other guy is Junior Barnes. 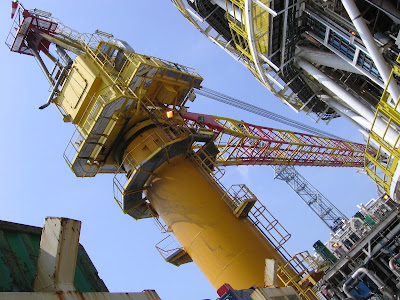 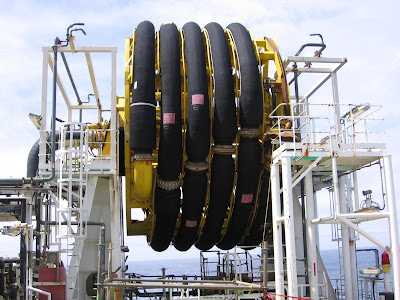 The offloading reel, the means by which our oil would be
transferred to tankers, to go on its way for refining.﻿

I could notice a real "ship" smell today too, which for some reason we rarely ever get... that mixture of diesel plus kelp plus fishieness. T'was cool!

I went as far back aft as I could go, and watched the "prop wash" trail out behind us. (That's the turbulence from the propellers, for those of you who are seriously non-nautical.) Being in one place for the past five years, that's not something we often get to see. I wanted to take some pictures really badly, but the ship has not been certified "gas-free" yet, so I'd have to have a certified gas tester person with me if I want to use electronic equipment outside the accommodations, and those that I would ask were busy... Maybe tomorrow if it's nice again. 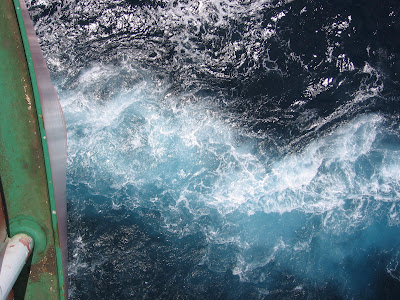 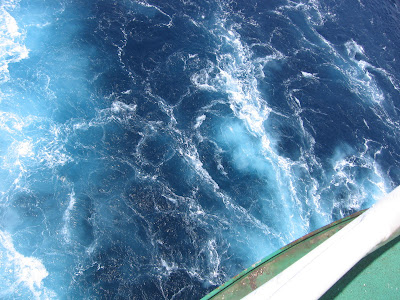 Photos of the prop wash that were taken a few days later.
I've resisted the urge to go the the bow and do an "I'm the queen of the world" pose. But I've thought about it! 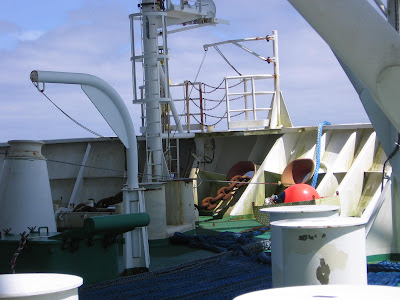 If I were going to imitate Kate (without Leo), this would have been the spot!
Anyway, that's the latest from here today. We're about 800 nautical miles from the English Channel now. We're getting there... The image and coordinates are where we were as of 1 pm Nfld time today. 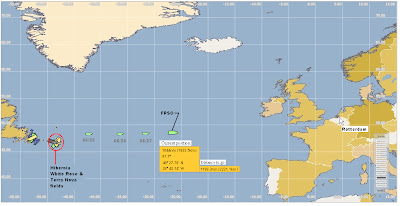 Stay tuned for the next installment!! (I hope I'm not boring the heck out of y'all!!)

Love and kisses to all,