When you gotta go...

A couple of years ago, a nifty product came on the market, called Just a Drop. 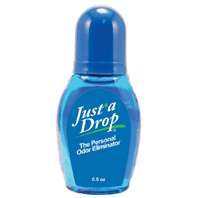 The wondrous thing about it was, it worked! One little drop and you could let loose a 'contribution' of pretty hefty proportions, and the person coming behind you would get the faint scent of eucalyptus, nothing more.


Not only were there little bottles to perch on the toilet tank, there were also little envelopes called "Singles" that were ideal for purses, wallets, what have you. 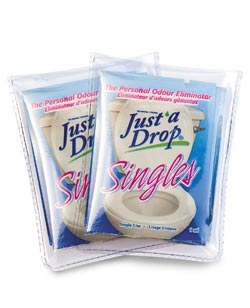 The advent of the Singles made 'taking one's ease' in a public restroom or someone's home a whole lot less traumatic for all involved.
Such a little product, such a magnificent effect!
Then, the makers of Just a Drop came out with a little pink bottle with a whole new scent.

I guess that, in the Pavlovian way of things, people were starting to equate the original eucalyptus-y scent with the scent of poo, so something new had to step up.
I have tried the pink one, and I have to say I find it has little to no scent at all, yet it is still very effective for what it is intended to do.
However, at my sister's house, a box of Sea-Dog matches has now appeared on the toilet tank, right next to the multicolored selection of Just a Drops.

It seems that my youngest nephew, (who, for the purposes of this post, shall remain nameless or he will murder me in my sleep), detests the aroma of both the Just a Drop blue and pink. Both eucalyptus and floral scents now smell as bad to him as a very healthy (yet poopy-smelling) dump.
He has a part-time job at an Irving station, where he works long hours in close proximity to colleagues and the restroom. There is no job on Earth where we all cannot learn something, and what he learned on this particular job is that if one lights a match before exiting the loo after having 'lightened the load', the smell of the burned match masks the odor, and allows one to retain one's dignity, unscathed.
I was let in on this little secret just last week, and am quite amazed by it! It is nice to know that there are now so many choices one has, when wanting to poo-poo the smell of poo.
However, I think I will still stick with the Just a Drop Singles if I'm ever on a plane again. I somehow don't think the match theory will appease the flight attendants or air marshalls, and I'm not too eager to be thrown on the floor and spread-eagled by someone looking for a bomb. Unless, of course, the searcher is a pilot who looks like Colin Firth...!
;-)
.
Posted by Margaret at 6:38 PM