Not as nice as tomorrow…

I'm glad no one unsubscribed. I would have felt really bad about that!!

Well, we made tremendous progress yesterday, about 225 nautical miles in about 25 hours. That's 259 statute miles, or 416 kilometers, whichever language you happen to speak. I think that was one of our best days yet. They had all five thrusters going, flogging the hell out of 'er trying to make some headway. It worked.

We're a stone's throw from being in helicopter range. Our first one is scheduled for tomorrow afternoon. We still won't be at our final destination, which is the Terra Nova field, until probably Monday night. The plan is to send a helicopter out Sunday afternoon, have it refuel on either Hibernia or the Henry Goodrich oil rig, and then have it fly on to meet us. Where our flights offshore usually take 1 ½ hours one way (on a good day with no head wind), this flight tomorrow will be 3 hours, one way. Hopefully it will work out, because the forecast for Monday is not good, and will only delay these guys even more from getting home.

I got a chance to get out today and take some more photos. I've got a fine collection going, let me tell you. All together, counting the photos taken when Alice was over in Holland with me for a holiday, I have 479 photographs and 58 little video clips taken from the start of this adventure up to today. I tell ya, my family and friends in the Greater St. John's region are going to be bored out of their minds one of these days. Maybe some of you a tad further afield one day, too!!! Hehehe… I remember threatening that before in one other newsletter on the way over, but for some reason, when we're all together, the subject never comes up. I wonder why? I'm just going to have to set up the TV and the popcorn one night, and THAT'LL remind them! I'm sure they just forget to ask to see them all. Yes, I'm sure that's what it is. Isn't it?

I'm going to attach two photos to this email, and I want y'all to figure out what is different about them. The first one to write back and tell me the correct answer wins a lifetime subscription to any future newsletters I may have the urge to produce. There are actually two things different about the photos. Let's see how nautical y'all are… I'll give the answers tomorrow. 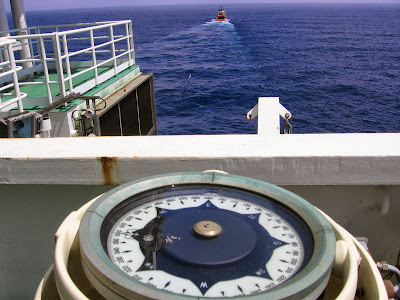 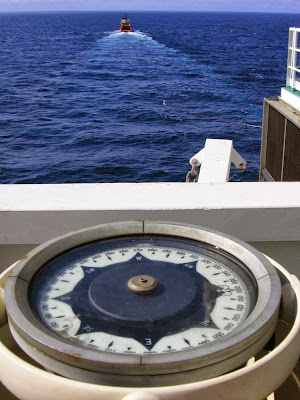 We still don't have television service back yet. Normally we have TV, about 20 channels via satellite. We haven't been able to pick up the signal yet, because the satellite is still below the horizon in relation to our position. The Telecomms Technician is hoping tomorrow will be the day. They've been playing DVD movies on several channels from the Radio Room since we left, but you never know when they start, or if what's on is fit to watch, so it is less than satisfactory. They have a great DVD collection here, over 500 and growing. No porn, it's not allowed, though I'm sure some of the guys have their own private 'collections'. But, there are an awful lot of (what I consider to be) dumb movies among that 500. If there are 20 that an average woman would be bothered watching, that's the outside of it. Schwarzennegger, Jean Claude van Dam, The Trailer Park Boys (flinch-twitch-growl), every sci-fi movie ever made, and so on. Forget finding "Pride & Prejudice" (the Colin Firth version – the ONLY one fit to watch) or "Sleepless in Seattle" or "Pretty Woman", although I made such a racket about it one time that they did go buy "Under the Tuscan Sun" just for me! And I'm sure I'm the only one whose ever watched it. Sigh. Great movie if you haven't seen it. They DO have some good stuff, too, like a couple of seasons of Six Feet Under, and all the seasons of The Sopranos, the Godfather trilogy, everything with Robert DeNiro and Al Pacino in it. I really can't complain.

Well, that's all I've got for you today. Hope you're all having a grand weekend! It's steak night here tonight, so I'd better get going! Talk to you tomorrow! 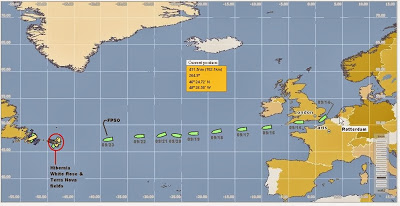 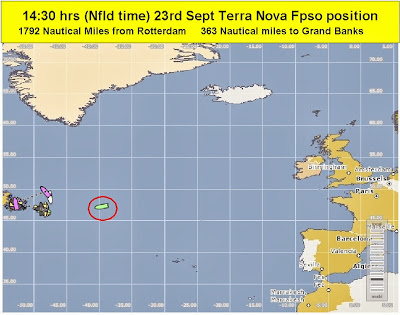 Well, I got up from my desk to go for my steak supper like I said I was going to do, only to notice on the CCTV screen that we were having a particularly nice sunset. So instead of eating, I grabbed my camera and galloped up over 6 flights of stairs to the bridge to get a few snaps. It doesn't take all night for the sun to set (hehe) so I had to hurry. The things I do for my 'craft'... 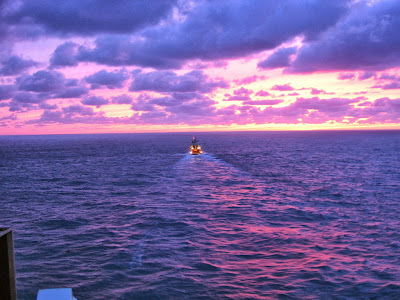 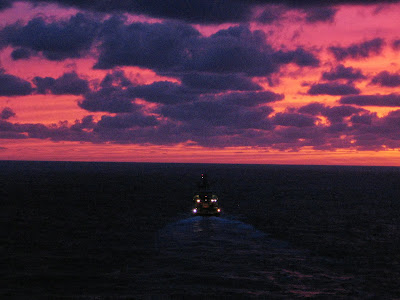 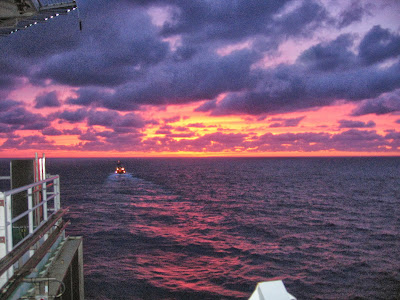 That said, I went to have my steak before I came back here to send this. I'm not totally silly! If you don't get to the galley during meal times, you don't get fed, simple as that. I couldn't miss my steak tonight! It was accompanied by made-to-order Caesar Salad, sauteed jumbo shrimp, battered shrimp, brocolli, fried onions and mushrooms, grilled chicken breasts for those who don't want a steak, herb-roasted potatoes, and about 15 different cakes, pies, flans, cookies and squares. I finished it off with a chocolate ice cream cone. Haven't had one of those in years, but I was in the mood tonight!

Back to the pictures... (I didn't mean to write a second newsletter tonight!!!) I'll include the photos of the b'ys on watch tonight, too. The guy on the left is Dwayne Whitt, who is First Officer, the one on the right is Louis Pennell, Able-Bodied Seaman. Don't ask me... *I* didn't call him that, although Louis IS a fine specimen of a chap...! ;-) 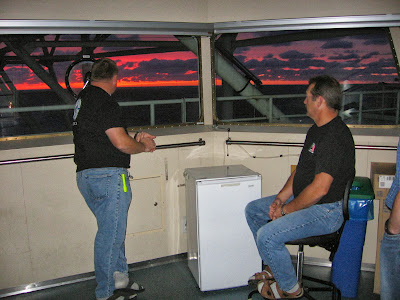 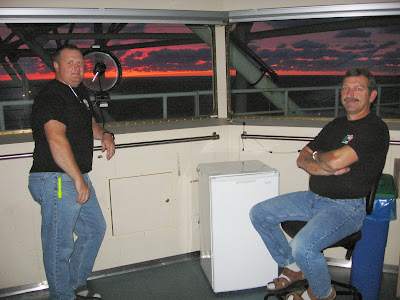 The bridge is dark on nights, so the guys on watch can see outside. They only have a small lamp on. No wonder ships run aground, I'd be sound asleep in 10 minutes! So, although it looks lit up on some of the photos, that's just from my flash. One of the radar photos, plus the one of the chart table, were taken without the flash. 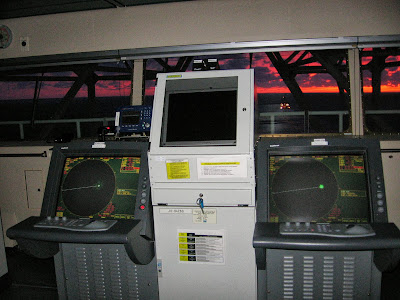 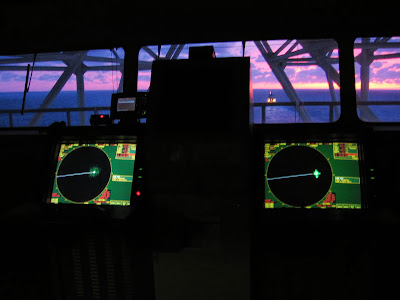 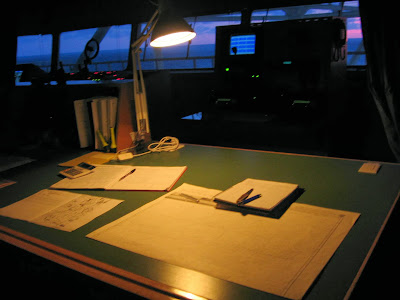 That's it from Annie Leibowitz tonight, straight from my latest gig snapping little Suri Cruise, daughter of Tom, for Vanity Fair. (They got the "vanity" part right!! I don't think they're referring to a bureau.).