No drama to write about today, fortunately. I don't think my last nerve could take it!

Well, you probably haven't finished reading the one I sent yesterday, so I'll keep this one short today. I can get a little wordy from time to time, you may have noticed.

We had our weekly emergency drill this morning, a simulated abandonment by lifeboat. That burned up an hour. The rest of the day, I've just been doing my weekly equipment checks, and staying out of trouble. Later this afternoon I have to give presentations on "prostate health" at two safety meetings. I'm a sucker for punishment! Then I have to go to another town hall meeting and talk about motion sickness. When that's all over, I get to play Bingo once again!!! It's a really big deal for us. Not a word of a lie. I believe I told you all about our big Bingo games in a newsletter on the way across back in July. Well, this is the first one held since then, so everyone is all excited. No one, so I hear, had the foresight to buy any prizes while we were still in the shipyard, so they're scrounging around today trying to find stuff to give away. I'm hearing that they've got some ball peen hammers as prizes. I'm not sure if my leg is being pulled or not. I'll let you know tomorrow…

I forgot to mention sooner (probably because I didn't send a Day 1 newsletter) that the day before we set sail (which was the day I arrived here), I thought it was odd to see guys walking around the dock and the ship with German shepherds. I probably thought I was hallucinating, I was so tired. It seems that they were actually bomb-sniffing and drug-sniffing dogs, and they went all over this thing from top to bottom. Apparently, they can only go for 20 minutes at a time, because they get tired from the constant sniffing and have to have a break. As far as I know, they didn't find anything. I don't know about bombs, but I know for sure that if they didn't find drugs, then 1) they either didn't sniff hard enough, or 2) the dogs are useless. I'd be absolutely shocked if there were no drugs on board here. After all, whatever drug you wanted was easily available in Holland, some of them legally, too. No way did this ship leave that shipyard 'clean'. I'd eat my hat if that was so!

I've only got one map to send today. I dare not ask where the other one is... these map 'artistes' are so touchy, I don't want to end up on their black lists! 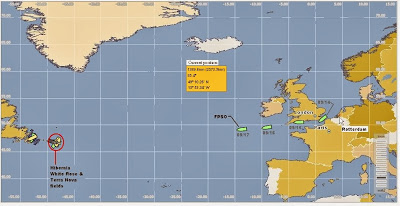 The forward thrusters have been running all afternoon, which is causing a bit of noise but a lot of vibration. For some reason, when they are running, it causes all kinds of problems with the phone system and computers and stuff. It may be that the vibration causes us to lose the link with the satellite. Purely a guess on my part. If they don't knock it off soon, I might end up having to send this on Monday morning because I can't access the Internet until the thrusters stop.

So, whenever you get this, I hope you have a lovely evening, or a happy Monday morning, or whatever fits!

I'll be in touch soon,