On this day, seven years ago, I was lucky enough to be on an oil platform for its return sail to the Grand Banks of Newfoundland.

This past July, I posted all the emails I had written to family and friends during the sail to Rotterdam, The Netherlands. At that time, I didn't know if I would be on board for the return trip, too, but the gods smiled, and there I was!!

The first of the emails was sent on Day 2 of the sail, that's why there is no Day 1 email, same as back in July.

Hope you come along with me for the trip!

Well, here we go again. We set sail from Rotterdam early on Wednesday morning, heading back to the Grand Banks. It's supposed to take us about 11 days.

This trip is a little different than the last one, when we sailed over here. At that time, it was pretty much business as usual. Everyone was excited and looking forward to the adventure. Now, though, we have a very tired crew, both from all the work that was done while in the shipyard, as well as from the heavy-duty partying that a lot got up to in the evenings. Not ME, of course! J I was well-behaved! We sailed to Holland with a crew of 120. We're on our way back with 156, so that's a lot of extra people to be fed, and a lot of extra aches and pains to mend. They're keeping all hands busy, that I guarantee.

Approximately 95 of us all flew over to Holland on Monday night / Tuesday morning. We left St. John's at about 9 p.m. It was a very long flight, made a lot longer by the most extreme turbulence I have ever experienced on an airplane. It started almost immediately after we took off from St. John's. I really thought, honest to God, that my number was up. There weren't any air pockets or anything like that. It just shook, up and down, side to side, dishes and stuff crashing in the little galleys. It was bloody scary. Add to that the fact that it was September 11 th, and that was on everyone's mind… well, it wasn't a lot of fun. Fortunately, it only lasted about 20 minutes. The pilot said it was due to jet stream turbulence. I eventually got my heart out of my throat, and looked forward to a nice glass of red wine to settle my nerves, only to discover that The-Company-Which-Shall-Remain-Nameless (TCWSRN) wrote into the charter flight contract that no booze whatsoever was to be served on the flight. {Insert rude comments aimed at TCWSRN HERE.}

It was a Skyservice charter flight, which had to stop in Keflavik, Iceland to refuel. That was different! I haven't had a lot of time to do much research on Keflavik, but I do know that it is a town of about 10,000 people, and has a US Naval Air Station. I've attached a map so you can see where Keflavik is in relation to Reykjavik. (That's the first time I ever typed "Reykjavik", and it's hard to do!) 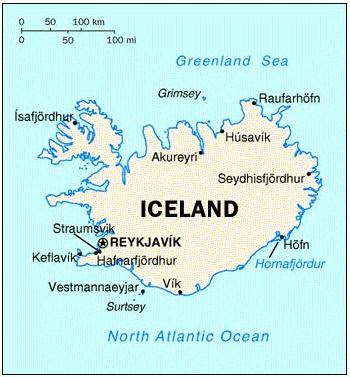 While we were refueling, I went up front to go to the potty, and got into a conversation with the flight attendant and pilot. They were really interested to hear about life on the oil platform, and I guess I looked like I wanted to chat, so that was nice. I asked the flight attendant if that turbulence was typical for her. She said no, it was unusually strong, but she had been through worse. Last year, a flight she was on hit unexpected turbulence, and she ended up hitting the ceiling, and being off work for 2 months. She said she's been flying for 10 years, so it was her turn. Seems it happens to them all at some point in their careers. She said that anyone who sits on a plane and doesn't keep their seatbelt fastened is crazy. She sold me!

Anyway, it took 4.5 hours to fly to Keflavik and then we left for Holland, which took another three hours. We couldn't get a "slot" to fly into either Rotterdam or Amsterdam, so we had to land in a small town called Eindhoven, a two-hour bus drive from the shipyard! Geez!!!!

We arrived at the shipyard at about 2 pm on Tuesday, which would have been 9.30 a.m. in Nfld. The platform still only had emergency lighting and no hot water, so it was looking pretty iffy as to whether or not we would sail the next day. Everyone just wanted to get a bite to eat and go to bed, but first, we had to have a "town hall" meeting. After that, we were told that Transport Canada required us to have a fire and abandonment drill at 7 p.m., so we had to stay up for that. As it turned out, Transport Canada kept delaying and delaying the drill, due to "issues" they wanted resolved first. (Probably related to the emergency power and plumbing!) The drill didn't happen until 11.10 pm that night! Bear in mind that 95 of us had been on the go since the previous morning. There was nearly a mutiny! I was here in the clinic during the evening, head on my arms, sound asleep at my desk. Someone came in to ask me a question about something (non-medical, fortunately) and I was just a babbling idiot, not making any sense at all! Needless to say, 95 people did not get up to go to work on time the next morning! I'm usually up at 5.30 a.m. but didn't wake until after 8 a.m. Perfect! I felt like a human being again.

We moved away from the dock at about 7.15 that morning, and were then on our way home. It certainly was an adventure, but I'm glad it's over! We were working here for three-week stretches with no running water, no toilets, only porta-potties, no way to wash properly, noise and dirt and really gross smells coming from God-knows-where… Yup, I'm glad to be on my way home!

Anyway, my peeps are doing the return journey maps again, so I'll attach those, too, for your amusement. They're probably using the same maps from the trip over, just turning the little boat around so it faces east! No, they wouldn't do that!!

Thanks to all for wishing us a good trip, either by your emails or your thoughts. I'll be in touch again soon! 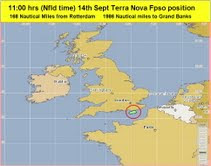