Hello from the Terra Nova Field! 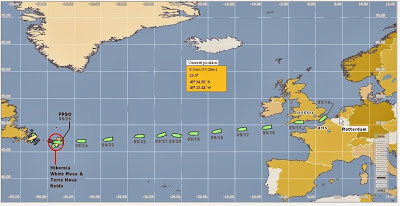 According to the skipper, our official "EOSP", End of Sea Passage, was at 5.24 a.m. NDT. That's all well and good, but when I was outside around 8 a.m., we were still steaming along, passing by other rigs that normally aren't close by, so we WEREN'T at our location, despite what the Old Man says! The supply ship wasn't towing us anymore, we were making headway all by ourselves. Around noon-ish, they were telling me that we were "hove to" about 5 km downwind from the Henry Goodrich oil rig. I found it odd that we needed to be downwind, but apparently that was in case we blacked out again, and started drifting towards the Goodrich, and us without an anchor. Our reputation precedes us!! Bwahahahahaha!!!

Yup, it's all over but the cryin'. It was easy to tell that we're 'home' – nothing but R-D-F out here all day long. That's Rain, Drizzle and Fog, by the way, a staple of Newfoundland weather for you who have not yet had the pleasure. Why is it that London fog is "romantic" but ours is "dreary". Bad PR, I guess. Maybe we needed a Jack the Ripper to give our fog some mysterious ambience.

After that sky last night that could easily have been mistaken for the tropics, is was a drag to wake up to drizzly foggy yucky skies this morning. But we're HOME-HOME-HOME, and that's worth putting up with a bit of 'pea soup'.

The helicopters are now coming with a vengeance – two today, three coming tomorrow, most with new people who require an orientation, one of my many responsibilities. So, I was out and about a lot today. I don't mind giving the tours too much when I'm not busy. It's nice to meet new people and see their awe at the place. But, this past week, I've been flat out busy, and I'm never catching up! I had the highest patient visit count ever for one week this past week, since I've been working offshore (9 years). I had 94 patients cross my threshold, that represents roughly 61% of the population having one ailment or another in one week! I think a bit of it is a case of them not having enough to do, so they get bored, and come to see me to get attention. They are boys, after all. Attention is as necessary as oxygen…!

So, we're all getting back into our usual routines. Soon, it'll be like the big trip never happened, it'll just be a distant memory.

But I have the pictures.

And the video clips.

And all the newsletters, to remind me of my adventures on the High Seas!

I hope you've enjoyed coming along for the ride, both rides, actually, as much as I've enjoyed telling the tales! Throughout each day, something would happen, and I'd tell myself that I'd JUST HAVE to remember to write about that later that day. Most times, I did remember, too! I did forget to tell you, though, that not only did we run out of tea bags, but we also ran out of Sugar Twin, gherkins, bananas, grapes, we almost ran out of potatoes (they were being rationed) and we came perilously close to running out of toilet paper. Believe me, if THAT had happened, a Breaking News edition of "The Sail Home Newsletter" would have been winging it's way to you, hot off the press!!!

So, what happens out here now? Well, over the next week, they will prepare to re-connect to the spider buoy, which is the engineering marvel that connects us to all the subsea lines. All the lines that suck up the oil, and pump water and gas into the reservoir, all come up from the sea bed and connect to the spider buoy, which later this week they hope to re-connect to the bottom of the platform. Then, they have to check all the lines for leaks, and pressurize all the production systems on board to make sure they're operational, and so forth. Finishing all this preparatory work will take until close to the end of October, which is when they expect to bring oil on board. I'll probably be back here again by the time that happens. (Don is probably laughing his guts out at my totally un-knowledgable description of all that, but that's the best I can do, I'm afraid! If Don can explain to me the intricacies of managing 3rd degree atrio-ventricular block, then I'll do a crash course on spider buoys!! So there!!)

Anyway, we're at the end of the journey, so it's time to drop the anchor on "The Sail Home Newsletter". Gotta love the metaphorical irony! Better to use the anchor analogy rather than to say we've run her aground, I think.

Thanks to you all for keeping me company!

I hope it's been fun for you, too.

Love and kisses and hugs and cheek-pinches,