Well, it's been a pretty quiet day today. Not much going on at all. The main topic of conversation (now that the Canadian Idol suspense is over) is about the weather. It's been a rough day today; high winds and seas, big waves, rocking and rolling. I don't know if there were any hurricanes recently that we're now encountering the tail end of, but today is like that, or like a typical February winter storm day without the freezing spray and driving snow and sub zero temperatures. Just like it! J

The rookies on board are all walking around with big eyes every time a wave hits. They're so cute! The ship is basically a big empty tanker, so when a wave hits, it makes a great big BOOMING sound, followed by a few seconds of shaking. It has happened a lot today, so they're learning to get used to it. (This does not even rate on my drama-meter anymore, but I have to admit, it used to.)

Along with the maps today, I am going to send a photo of a Delft china plate that was presented to the ship by the management of the shipyard where we were in Rotterdam. Delft ware, as you may or may not know, is named after the Dutch city of Delft, and has customary blue painting on white china (or pottery, or earthenware, whatever the case may be). This is a one-of-a-kind plate. There are markings on the back which I haven't been able to photograph yet because this plate is currently in a locked display case. It is very pretty, and a lovely memento for the crew. 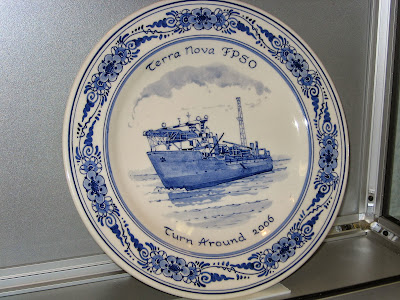 Oh, I can send a Bingo photo too! 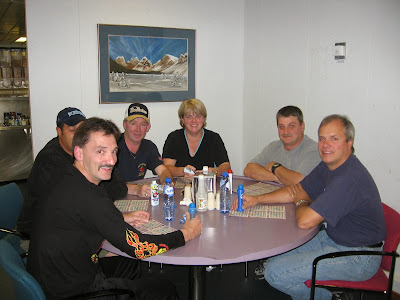 By the way, there were more than just ball peen hammers given out. They actually had a nice array of guy-stuff – vice grips, wrenches, regular hammers, ball caps, key chains, thermal mugs, that sort of thing. I won nothing. NOTHING!!! I was at a table with five guys. Every one of them had their names drawn out of a hat for a ball cap, but nope, not me! One of them gave me his, a Rolls-Royce cap. We have Rolls-Royce guys on board at the moment, so we must have engines or motors or something made by them. I dunno. That's boy-stuff. All I know is that I go to Bingo faithfully, dabber in my eager hand, but never have I called out that magic word. However, my luck has been better in the past with the hockey pools, and hockey is starting soon, so hopefully that's when my luck will change!

Well, that's it for today. We're not quite half-ways across the Atlantic, but we're over half-way from Rotterdam, so progress is being made! I don't think we'll do it in the 11 days they were hoping for, though, but y'never know. It took us 13 days heading the other way, going with the current, without a breath of wind or ripple on the seas, so this has got to be slower. We'll see. 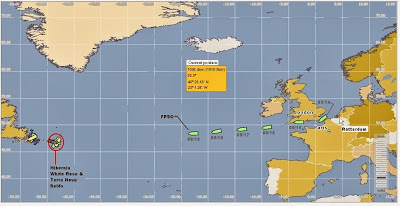 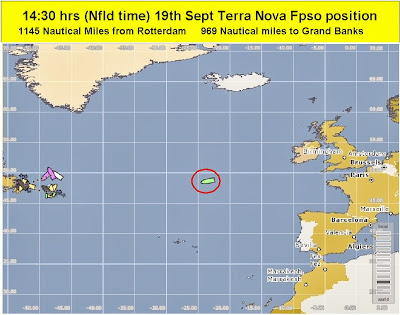