Whenever I wonder why the heck I work out here, it's not long before some drama or other occurs that makes me glad I'm alive. By that I mean glad to have survived the drama. The turbulence on the plane? OLD-OLD-OLD news. Here's the latest in my trans-Atlantic saga…

You're in an empty room, probably about the size of a bathroom in an average house. The room is made of steel walls. You are stood in the middle of this room, swinging a chain made up of links the size of a big fist, which, as you swing it, it is crashing around on the steel walls. Really loud, huh? Well, multiply how loud you think that would be by 10.

Ok, forget that for a moment.

You're in bed, just about solid asleep. Life is good. All's right with the world. On the other side of the wall at the head of the bed is that room made of steel. All of a sudden, the most un-Godly racket erupts in that metal room, someone's in there swinging that chain. Don't forget you've multiplied the noise by 10. (A conservative increase.)

Let me tell you now that no matter how good your imagination is, you can't imagine the racket that I woke up to last night. What happened, you ask? Well, as best as I understand it, the b'ys had lowered down the anchor a little bit over the side from where it lives, and when they went to retrieve it back up to the top, the winch let go, and several tons of anchor, and several more tons of anchor chain ripped up out of the chain locker – that metal room at the head of my bed – and payed out over the side, down to the ocean floor. I have attached here for your further amusement a photo of my dainty size 11 foot resting against one link of the anchor chain. (This was before it fell, of course.) ;-) There was over 1300 feet of this chain lost over the side. I'll also send a snap of the anchor, which weighed in at a hearty 16 tons. Each link of anchor chain weighs in excess of 200 lbs., so they're big heavy links and dammit-all do they make a hell of a racket when they're tearing out over the side. It took about 45 seconds for it to stop.

In the meantime, though, yours truly was in her cabin, not knowing what the hell iceberg we had just hit, or how big the whale was that got stuck in the thruster, or how the front of the ship managed to get ripped off, or any of the possibilities that ran through my mind.

I was out of the bed, jammies off, clothes on, and out of the room before the noise stopped. For a - ahem – 'voluptuous' gal, I can move when I have to.

(By the way, thank you to Don for noticing that I'm not QUITE as voluptuous as I used to be!!! XOXOXOXO!!!)

When – yet again – my heart was back out of my throat and down in my chest – I went back to my cabin, and all I could do was laugh - my quilt, which I usually just toss to one side of the bed as I get up, was completely spread out over the couch and floor on the opposite side of the room. I just sent it off in flight, apparently, as I was trying to get out of bed. My jammie bottoms were on the floor, leg holes perfectly round and open, ready to be stepped into to and hauled back on again. They apparently just came straight off. Down they went and on with the jeans! It was hilarious to see. I guess you had to be there…

Anyway, it was a pretty scary way to wake up, no doubt about that. But fortunately, no one was hurt, and where we're going we really don't need an anchor, so minimal harm was done. (Aside from the winch which was reportedly spewing a rainbow of sparks and smoke while this was happening.) I'm sure the powers-that-be are not amused, though. Apparently, the site where the anchor was lost, just below Land's End (speak of the devil) at the mouth of the English Channel, is an area with an abundance of trans-Atlantic cables running along the sea bed. They're thinking they'll send a supply ship to retrieve it, but it's going to be a tricky situation if it's tangled up down there. If Europe goes black all of a sudden, we'll all know who to blame…

So, I go back to bed, and then at 1 a.m. the boss calls me, telling me I have to do 'assessments' on the guys who were involved in this "high-potential incident". (A situation resulting in a million-dollar loss, to me, is not a "potential" incident, but that's just me…) Anyway, I got back to bed at 3 a.m. I left a message for the boss and told him I'd be sleeping in. I figured I'd be up by 8 a.m. When I rolled over and looked at the clock, it was just heading for 10 a.m. Yikes!!! Was a good snooze, though!

And, to make the day just a little bit more interesting, it turned out to be a 26 hour day. How can that be, you ask? Well, at 2 this morning, all our clocks were set back an hour, as we start to account for the various time zone changes. Then, this afternoon, the clocks went back another hour. So, from when I got off work at 6 p.m. yesterday until I got off at 6 p.m. today, 26 hours had passed. I tell ya, I should be paying THEM for thrills like this!!! 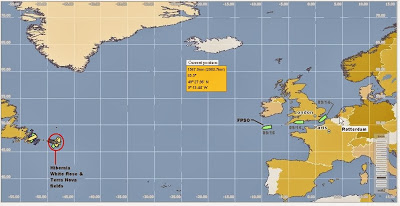 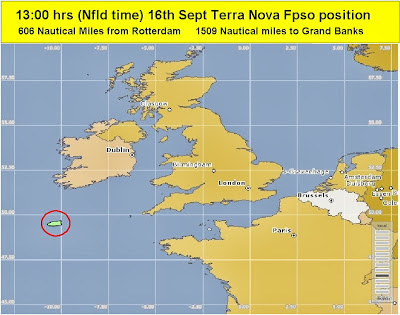 Photos of a link of the chain... 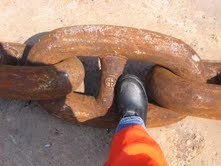 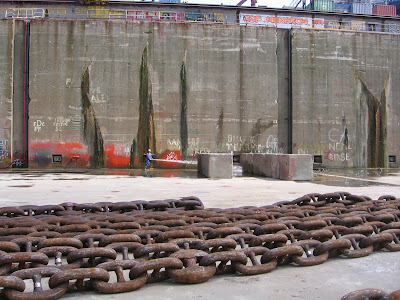 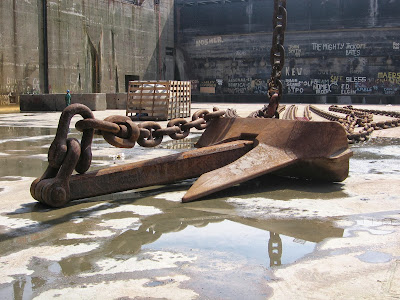 A photo of me holding up a thruster ( J ) A considerable-sized whale theoretically could get chewed up pretty good in one of those. There are 5 of them, by the way. 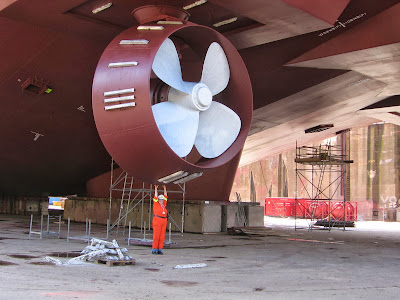 I'll also attach a photo with arrows showing how big my boat is, and where the anchor was when all this started. 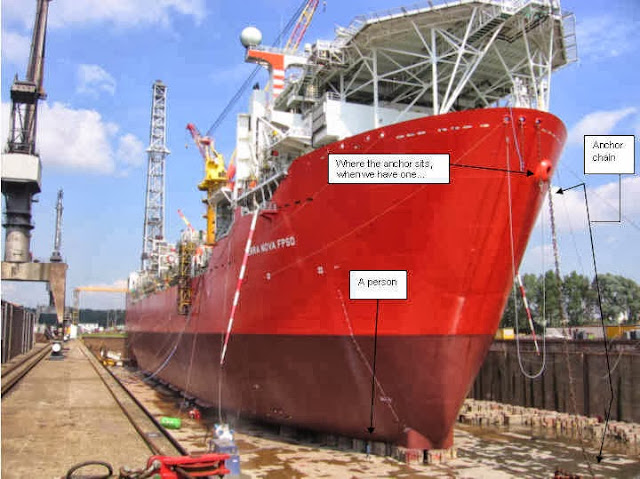 Aw, what the heck, I'll send one of me stood right at the bottom point of the bow, down on the dry dock floor. I'm the orange smudge. 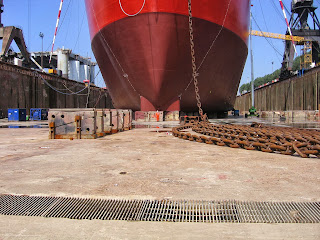 Well, I'm sure that's as much excitement as y'all can stand for one day.
Until tomorrow, then, as we sail just south of Ireland, allow me to say "Top o' the evening to ya!"