Let me start off by saying..

Mr. Don Linfield is the lucky winner of the "What's different about these pictures?" contest! He was – UNBELIEVABLY – the only entrant, but fortunately he identified BOTH things that were different about the photos. The first thing is that one compass is indicating that we're going east, and the other one is indicating that we're heading west. Therefore, one was taken when we were heading to Rotterdam, and the other one was taken on the return trip home. Good eye, there, Don! The other difference is that they are two different compasses. The eastbound compass is on the starboard bridge wing, and the westbound compass is on the port bridge wing. (Port = left, starboard = right. Port & left have four letters so it makes it easy to remember!) The bridge wings are the small decks on either side of the bridge, where the Captain can see down to the water when docking. I'll send a photo of the starboard bridge wing that I took from up above it, when we were docking in Rotterdam. The man in the dark blue shirt and blue jeans is the Captain, Ed Cooper. He is standing in the exact spot where I was standing to take those sunset pix last night. The other man is one of the Rotterdam Harbour Pilots. 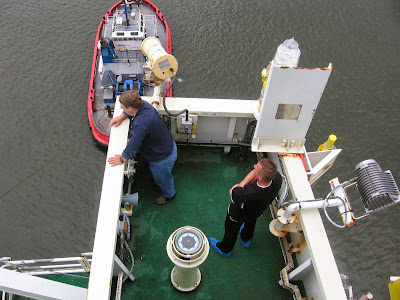 Speaking of those sunset photos… I realized that I got up to the bridge a little too late to get GREAT sunset pictures, so I went up earlier tonight, and shot FORTY-SEVEN!! " Yikes," I can hear all thirteen of you say in unison, "I hope she's not thinking of sending us FORTY-SEVEN pictures to look at!!" No, I'm not, you ungrateful wretches, but I should send 'em all for you thinking that, like it would be a bad thing!!! I really liked that chart table picture one, but you may have noticed it was a bit blurry, so I did it over, and now I got one that's sweet!!! So, more sunset pictures are heading your way. Not bad for an amateur, if I do say so myself. 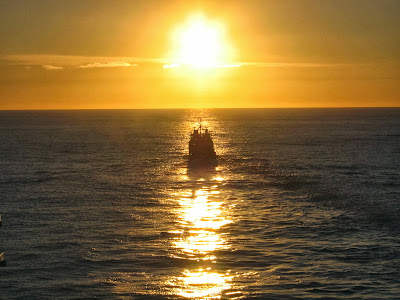 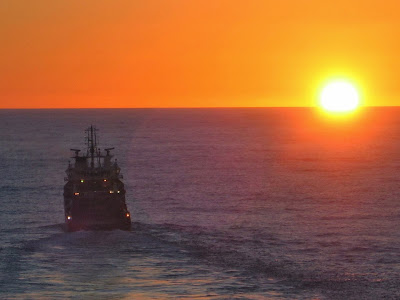 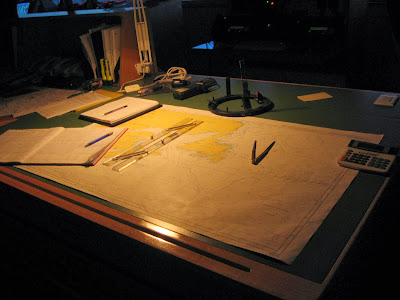 Speaking of the Grand Banks, while I was on the bridge, I took a close-up of the chart, showing that we were right on top of the Flemish Cap at noon today. You can see "noon" penciled in. 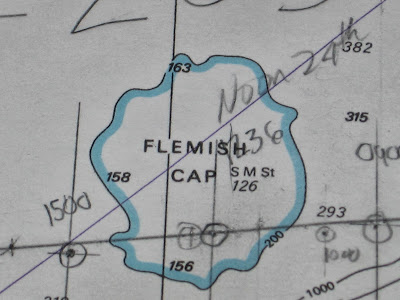 Then I took another one, showing the Flemish Cap in relation to our final destination You can see where the pencil line ends at "Precautionary Area", and I framed "Hydrocarbon Exploration Area" with the calipers. 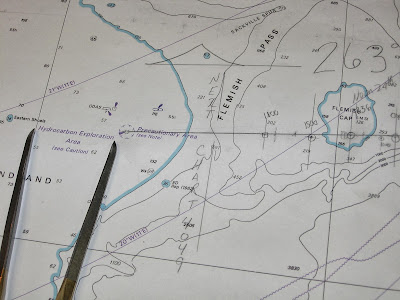 Then finally, I took one that shows Newfoundland, the calipers and the Flemish Cap, to put it all together. 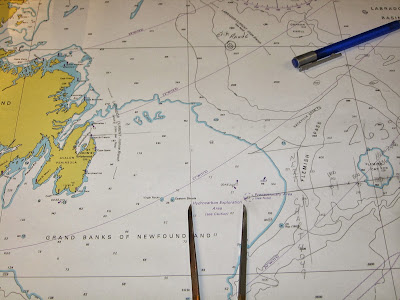 If you enlarge the photo and see all those little numbers randomly printed on the chart, they all indicate the water depth in meters. What always amazes me is that one area shows depths of around 50 meters, then not that far away it's over a thousand meters. The continental shelf is a wondrous thing.

Trivia time – if this platform / ship were to sit upright on the sea bed on location, the top of the flare tower at the very back of her would protrude out of the water. Relatively speaking, it's not that deep. So, if she ever starts to sink, I'm making for the flare tower and starting to climb. She better stay upright, though!

Well, today we had our first helicopter land on our Heli-deck since June 22nd. Twelve guys got to go home, and twelve got to come aboard for the last of the trip. Finally-finally-FINALLY, the fellas who had deaths in their families FINALLY got to go home. I can't imagine the week they've put in, and I hope I never know. The week *I* put in feeling bad for them was bad enough. (Tea bag jokes notwithstanding.)

Tomorrow morning, then, I imagine, I will be getting the last of the maps. I expect it will show the FPSO in that big pile of ships, supply vessels and oil rigs that marks our spot on the map. We'll just be one more in the crowd. The supply ship that towed us and figured prominently in all my sunset photos, will be disconnected from us in the morning, and she'll go on her merry way. The end of the journey approaches…

(Thought to self – "I don't suppose Don is the only one who's actually reading these foolish things, is he? Hmmm…")

I can hear you all now – "Yes, I knew the compasses were pointing in different directions. Of course I knew it! That was easy!" To quote Judge Judy, "BALONEY!!" Easy to say that now, now that you know the answers! You get the lifetime subscription to my future newsletters, Don. You are truly blessed. ;-)

Anyway, all, I'm late getting this finished tonight. I was bound and determined to get those photos, and almost missed supper because of it. I had them put away a plate for me – Jigg's Dinner tonight. For my mainlander and American friends, Jigg's Dinner is a traditional Newfoundland meal of salt meat and cabbage and potatoes and turnip and carrots and pease pudding, typically all done in one pot. I believe a variation of it is well-known in the Boston states, if I'm not mistaken. Along with that was turkey, dressing, gravy and ham. A fine scoff, indeed. Burp.

It just occurred to me that you may be thinking, "The girl has been working out there for five years… why is getting a photo of a sunset at sea such a big deal?" Good question, if indeed you did ask it. The "thing" is, when we're producing oil, we are not allowed to have cameras on board. Even when I was traveling to the ship to start the sail back in June, the people at the Heli-port in St. John's weren't going to let me take my camera. That would have been a show-stopper, and a tantrum-starter, but fortunately it didn't come to that. Photography is extremely limited and controlled under normal operations, so this will be the only time I'll be allowed to have a camera out here. Gotta make hay while the sun shines!

On that note, I'll bid you all a fine evening. (Has anyone but me noticed that the Yankees have been sucking like a vacuum since they won the AL East? I'm hoping they're getting all of their losing games out of their system before the playoffs start.)

Nighty night, one and all. Until tomorrow… 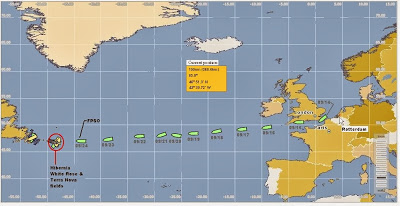