Hello again from the high seas!

Well, here we were, sailing along, minding our own business this afternoon, when suddenly I find myself in the pitch black dark! They were testing those pesky thrusters again, and the main power generator went kaput. This is following one of the key service generators going kaput at three this morning, but I didn't know about that at the time. This one I knew about. (Er… weren't the generators one of the driving forces behind us going to Rotterdam? Hmmm…) On a normal day, I probably would have gotten a tad worried about finding myself in the dark, but after turbulent jets and anchors going aweigh… er… I mean "away" (hehe), then a little darkness was actually soothing in a 'what-the-heck-is-happening-NOW' kind of way. At some point, ya just gotta be 'at one' with the drama. I'm getting there! Apparently, whatever went wrong with both generators was fixable, and all is well again.

It's actually been a sad day onboard. One of our contractor crewmembers found out this morning that his 49 year old sister died of an aneurysm in Toronto last night. We're at the point in this trip where we are outside of helicopter range, so there's no way to get him ashore somewhere to fly home. We won't be within helicopter range for another 5 – 6 days. I can only imagine what he's feeling. His buddies have been sitting with him in his cabin throughout the day, keeping him company. He says he's going to try to get out and about tomorrow, but he's not looking forward to everyone's expressions of sympathy, thinking he'll get upset. Who wouldn't? What a situation to be in. I somehow wonder if it wouldn't have been better to try not to tell him until he was closer to home, but then again, his wife would have to be an Academy Award-winning actress for him not to know something was up.

There's also another guy who's mother has been very sick for a while now, and he just found out after supper tonight that she's on her way from St. Mary's Bay to the Health Sciences in an ambulance, telling her husband that she's dying. Not a good thing, as they're often right.

Even if we were on the Grand Banks in the fog, there's always a supply boat either right there, or going to town in a day or so. With these guys, and with the rest of us, it doesn't matter what happens, how critical or tragic, no one here is going anywhere for the next 5 – 6 days. We were all lucky on the trip over to Rotterdam. Not so lucky on this trip back.

What worries me is that according to "Nurse's Lore", established and proven time and time again since the days of Florence Nightingale, bad things come in threes. They really, really do. Scientists may argue the point, and decry as superstition (what Nurses know as FACT) that, for example, more babies are born and more people die during full moons. And, if you have two Code 999s on a shift, you will have three. I've lived the lore, I know of which I speak. I hope that during the next week, I am proven wrong. I'll be very, very happy to be proven wrong in this case!

Anyway, the lights are back on, we're sailing along, probably making better time because we dumped all that excess anchor and chain weight! (Gotta find a silver lining!) Let's hope and pray that all the news for the next few days is good.

So everybody, family and friends - be careful, stay healthy, eat your Wheaties, stop at stop signs, look both ways before crossing streets, and don't run with scissors. I don't want to find myself in the shoes these guys are wearing tonight. 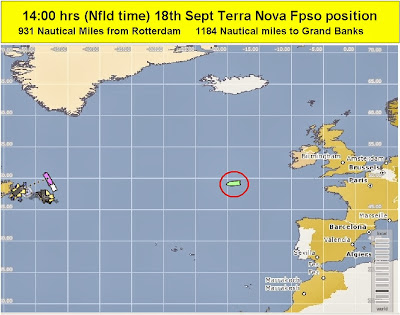