I had a busy day today. I got up and baked a birthday cake first thing, then went out for coffee with a former colleague who wanted to buy two of the dialysis cookbooks I worked on last year. After that, I had to buy some groceries and make a trip to the liquor store, then take my nephew for a haircut. I then came home, vacuumed the house, iced the cake, made enough macaroni and cheese to feed a schooner’s crew, washed a ton of dishes while another ton was in the dishwasher, set the table, and wrapped the birthday gifts. I was heading to the living room to sit for a minute before the festivities began, but everybody arrived before I could do that.
It was my sister’s birthday. It was a nice party with all her young’uns together. That doesn’t happen much. She’s already had a bunch of birthdays and claimed she didn’t want a fuss, but still! You have to mark the occasion, and it’s gotta be nice, but this year, there was only one little gift that she didn’t know about, and I hate that! I don’t mind that she knew some of the gifts, after all we’re not six years old anymore, but it’s nice to have a surprise or two, all the same.
The one little surprise was a Chris de Burgh CD, “Moonfleet and other stories”. 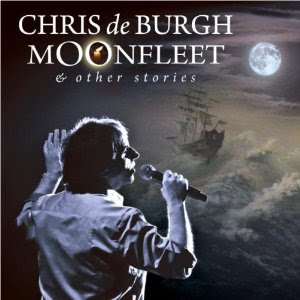 “Moonfleet” is a book by J. Meade Falkner, written in 1898, and set in 1757, about a young boy, John Trenchard, who grew up in the of , on the south coast of . It is a wonderful, wonderful story.
My sister, who is a couple of years older than me, studied “Moonfleet” in school. The Captain on the last ship I was on did it in school as well. It wasn’t done when I was in school, but I did come across ’s copy, decades ago, and have read it several times since. The most recent time was just a month or so ago. I had bought it through the Sony Bookstore and downloaded it onto my eReader, and enjoyed it immensely once again. (…that is, if you can call a book that makes you cry your heart out at the end “enjoyable”, then I enjoyed it!! I can't remember the last time I cried while reading a book, but this one did it, for sure.)
The Captain who I mentioned before was looking at my eReader one day and saw it there, that’s how we got talking about it. After he left, I looked on amazon.com to see if the book was still available for purchase. (It is.) While I was looking for it, that’s when I came across Chris de Burgh’s “Moonfleet and other stories” CD. He has written songs about the story which are interspersed with his own narration of the book. I was thrilled to find this, knowing Chris de Burgh to be the wonderful storyteller he is from his own songs and ballads over the years.
So, I got one for , and needless to say I got one for me, too. Now, all I need is a stormy night, with a fire in my (so far non-existent) fireplace, a glass of bootlegged rum, and my CD playing on the stereo, so I can relive the tale of John Trenchard, the church, Blackbeard’s coffin, and the Why Not? , with the cribbage table which bears the inscription, “As in life, so in a game of hazard, skill will make something of the worst of throws”.
If I were ever to be marooned on a desert island, and could only have one book with me, “Moonfleet” by J. Meade Falkner would be that book. I hope the Chris de Burgh CD does this beautiful story justice.
Happy Birthday, !! I hope your little surprise turns out to be a good one!!
Posted by Margaret at 10:31 PM