Looking back, it has always bothered me how very little I was taught, during my school years, about the history of Newfoundland.

(Forgive me for my very politically incorrect reference to my province as "Newfoundland", versus "Newfoundland & Labrador". If "Newfoundland" sufficed for over 500 years, and included that portion known as Labrador for all those years, then I guess it just goes to show that I don't feel the same need to kow-tow to the 452 Indians and Eskimoes up there as the politicians seem to want to do. So, until I gasp my last rattly breath, it will ALWAYS be "Newfoundland" to me. But, I digress...)

Some guy named Joey Smallwood, whose portrait, I am told, is buried with countless little old ladies in graveyards all over Newfoundland (because he, personally, bestowed on them the Baby Bonus, out of his own pocket if you listened to the little old ladies), got ahead of me in the line to write a history of Newfoundland. I don't know exactly what his gig was, the first premier I believe, ("The only living Father of Confederation" is what he liked to call himsef) but it seems he must have had a lot more time on his hands than I do to undertake such an endeavor.

I do remember being taught about the Beothuk Indians in Grade 4. I was so inspired by the tales of teepees and long houses, that I went out into my own back garden one afternoon with a knife, and carved bark off a tree, in order to fashion a canoe. My father, who never raised his voice to any of us in his entire life, was himself a little miffed by this assault on the vegetation. I guess if my name had been Shanawdithit - the last surviving Beothuk in Nfld. - he would have been more understanding. But, aside from learning that they would occasionally chew out a pair of mukluks or mocassins from time to time, I learned nothing whatsoever about the vast history of our province. Nothing at all about the Vikings, Lanse aux Meadows, the English and French, Responsible Government, the Referendum, Confederation, the American influence - nothing.

So, what I plan to do, in order to promote the history of the land that I love, is to find a tidbit of Newfoundland history from time to time, not only to share it with those who may choose to read this blog, but mainly for my own education, as the opportunities to learn of its history in school were essentially non-existent.

The Pollux, a supply ship & the Truxtun, a destroyer, were American ships that sunk off the south coast of Newfoundland on February 18, 1942. The 69th anniversary of this disaster was two days ago.

Three ships, these two plus the USS Wilkes, were en route to the US Naval Base at Argentia, Newfoundland. In a terrible snow storm, the Wilkes ran aground, but was able to free herself. The other two vessels were not as fortunate. They crashed ashore approximately a half-mile apart.

Four water-soaked, oil-covered sailors from the Truxtun made it ashore, scaled the cliffs, and sought help for their shipmates.

When word of the impending disaster spread, the workers at the Iron Springs Co. mine suspended operations, and the citizens of Lawn and St. Lawrence did whatever they could to rescue as many souls as possible.

From the Newfoundland Grand Banks website comes the following...


"Rescuers attempted getting a rope across the cove to make connections with the wreck, but strength of wind defeated them. In hopes of saving three men clinging to the wreckage, two men volunteered to be lowered down over the cliffs in a dory. They reached the wreck, saved two men, were swamped coming back, and one local man was washed overboard. As he was seized in the nick of time by his companions and hauled to safety. And so the hazardous task of rescue continued all through the day, till the last living men had been landed."

And people think I'm stupid and overreacting when I get offended by 'N__f__ jokes'... (Oh yes, another time, another rant, indeed...) THIS is who Newfoundlanders are. These brave, selfless souls from St. Lawrence typify who we are, and have been for generations. THESE are the people who the world should know about, and who Newfoundlanders should want to tell stories about. Not those others. Too many Newfoundlanders have lived and died in the service of others for us to allow ourselves to be insulted, and worse - defined - by those jokes.

Lanier Phillips was one of the survivors of the wreck of the USS Truxtux, and was also the only black man among the crew. His story is legendary in Newfoundland.


"Initially afraid to leave his doomed ship because he thought he was off the coast of Iceland where he had been told blacks were forbidden to go ashore, Mr. Phillips boarded a lifeboat which capsized as it reached shore. Exhausted and covered in oil that had leaked from the sinking ships, Mr. Phillips collapsed on the shore. Gently prodded to his feet by a local resident who told him he’d freeze to death if he didn't get up, Mr. Phillips was confronted by a experience that was totally new to him: "I had never heard a kind word from a white man in my life.”

Mr. Phillips was taken to a place where the local women were washing oil from the survivors, and when they realized they could not scrub his skin white, he was afraid their kind treatment would end. Instead a local woman, Violet Pike, insisted that he come home to her house where she nursed him with soup and put him to bed with blankets and rocks she'd warmed in her stove.”


Profoundly touched and forever changed by the kindness of the residents of St. Lawrence, Newfoundland, Mr. Phillips vowed to do everything in his power to repay the kindness he had experienced, eventually donating enough money to St. Lawrence for them to build a children's playground."

"Quoting A.L. Bristol Rear Admiral U.S. Navy at that time in his letter of gratitude to the people of St. Lawrence, "Memories of such acts can never die, and the total of almost two hundred men and officers saved on this occasion will stand as a monument to the people of St,. Lawrence and all Newfoundland, in the hearts and minds of all who know the story." In generous recognition of the services rendered, the United States Government has erected at St. Lawrence a modern, three story hospital. the all-concrete structure, completed in 1954, is known as the United States Memorial Hospital. This hospital has been taking care of the medical needs of St. Lawrence, Lawn and nearby towns most adequately. Many the time this quotation has been made by a grateful townfolk - "THEY DID NOT DIE IN VAIN"."

Survivors - 186. Souls lost - 203. God bless them, and God bless the people of Lawn and St. Lawrence, for their heroism and bravery, second to none. 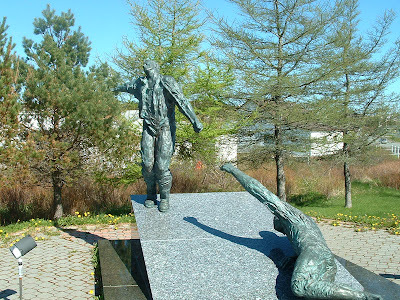 Picture of 'Echoes of Valour' memorial, dedicated to (1) the mining industry in St. Lawrence, Newfoundland, (2) the sailors who died in the USS Truxtun & USS Pollux disaster on February 18, 1942 at Chambers Cove and Lawn Point, and (3) those who lost their lives in the world wars.

If you want to learn more about this disaster, and about Lanier Phillips, I recommend the following website from Memorial University of Newfoundland - Dead Reckoning: The Pollux - Truxtun Disaster. It tells the whole story in chapter form, and has sections about the rescue, Lanier Phillips, and other fascinating bits of information. I am so glad I found this.

Also, the late Cassie Brown, renowned Newfoundland author, wrote a book, "Standing into Danger" about this event. Well worth reading.

I knew I'd never be able to do justice to this story myself, but it is gratifying to at least be able to point interested people in the direction of those who could. I hope you're one of them.