Many on my Lenten 40 list are there because of my admiration for lifelong works and achievements. Others I have chosen because of one single thing he or she has done; something extraordinary, worthy of respect and admiration. Gordon Sinclair is one of the latter. 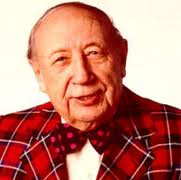 Anyone who knows me at all knows that I love all things American. I love their history, their patriotism, their can-do kick-ass attitude, not-so-much their electoral process (...and the Electoral College, that's just stupid.) On the home page of this blog, I have stated that I want to write "the Great American Novel". I equate 'America' with 'greatness'. With good reason. They, as a nation, are great.

(UPDATE - A tad off-topic, but once again, my sister proves why she is smarter than me, and she is!! Thanks for the Electoral College education. It is not as stupid as I thought!)

It is my studied opinion that people who automatically and sweepingly dislike Americans in general - dislike their culture, their politics, their way of life, their patriotism - are people who, deep down (or maybe not so deep), are envious of a country conceived in revolution, that continues to fight for its own, and to hell with anyone who gets in their way. Envious? I deeply admire that about them.

So, too, did Gordon Sinclair.

Mr. Sinclair was, at one time or another, a newspaper reporter, a news broadcaster, a sports reporter and a radio station owner.

If you're around my age, you will remember Gordon Sinclair as a panelist on the CBC television show "Front Page Challenge", one of the very few brilliantly creative and intelligent programs to ever come out of Canada, and the CBC. He appeared on this program from 1957 until his death in 1984.


"On June 5, 1973, following news that the American Red Cross had run out of money as a result of aid efforts for recent natural disasters, Sinclair recorded what would become his most famous radio editorial, "The Americans (A Canadian's Opinion)". While paying tribute to American success, ingenuity, and generosity to people in need abroad, Sinclair decried that when America faced crisis itself, it often seemed to face that crisis alone."

How absolutely, incredibly insightful, and true. And sadly, not much has changed, from 1973 until 2012.

I first became aware of "The Americans (A Canadian's Opinion)", right around the time of Hurricane Katrina. It had made a resurgence on the Internet, television and newspapers at the time of that disaster, as well as at the time of September 11th.

Mr. Sinclair had written and broadcast this editorial, thinking it was no more than one of his usual efforts. Within a short space of time, he received over 8,000 letters about it, and one radio station in the US recorded a version of it with "The Battle Hymn of the Republic" music in the background.

Because of the huge response it garnered, it was sold as a 'single', with all of the profits going to the American Red Cross. 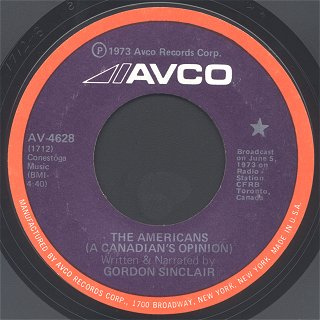 In 1981, when President Ronald Reagan made his first state visit to Canada, he praised Sinclair as a figure who had given the United States a wonderful and inspiring tribute in one of its darkest hours.

Being a Newfoundlander, I am very much aware of the contributions the American servicemen made to this island while stationed here during and after WWII. They gave us our power grid, as well as hospitals and employment. It always pains me to know that so many Newfoundlanders, ignorant of these facts, routinely have little or nothing good to say about them. It makes me sick to have our ignorance displayed, almost daily, in this context.

So, that is why Gordon Sinclair's "The Americans" strikes such a resonant chord with me. It does not diminish us at all, as Newfoundlanders or Canadians, to acknowledge Americans as good, decent people, much like ourselves, just with more of a fighting spirit. No one, including me, has ever said they're perfect. They're not. But they deserve more credit from the world than they get.

I know this much... if the terrorists had flown jets into buildings in Canada, the Americans would have been the first ones on the scene, saying, "We are here to help. What do you need? Let's get those b*st*rds."

Thank you, Gordon Sinclair, for having the honesty and courage to write such an essay that is still relevant and true, 39 years on.

Here it is, both the video and the text versions.

The Americans (A Canadian's Opinion)

"The United States dollar took another pounding on German, French and British exchanges this morning, hitting the lowest point ever known in West Germany. It has declined there by 41% since 1971 and this Canadian thinks it is time to speak up for the Americans as the most generous and possibly the least-appreciated people in all the world.

"As long as sixty years ago, when I first started to read newspapers, I read of floods on the Yellow River and the Yangtze. Well, who rushed in with men and money to help? The Americans did, that's who.

"They have helped control floods on the Nile, the Amazon, the Ganges and the Niger. Today, the rich bottom land of the Mississippi is under water and no foreign land has sent a dollar to help. Germany, Japan and, to a lesser extent, Britain and Italy, were lifted out of the debris of war by the Americans who poured in billions of dollars and forgave other billions in debts. None of those countries is today paying even the interest on its remaining debts to the United States.

"When the franc was in danger of collapsing in 1956, it was the Americans who propped it up and their reward was to be insulted and swindled on the streets of Paris. And I was there. I saw that.

"When distant cities are hit by earthquakes, it is the United States that hurries into help... Managua Nicaragua is one of the most recent examples. So far this spring, 59 American communities have been flattened by tornadoes. Nobody has helped.

"The Marshall Plan... the Truman Policy... all pumped billions upon billions of dollars into discouraged countries. And now, newspapers in those countries are writing about the decadent war-mongering Americans.

"Now, I'd like to see just one of those countries that is gloating over the erosion of the United States dollar build its own airplanes.

"Come on... let's hear it! Does any other country in the world have a plane to equal the Boeing Jumbo Jet, the Lockheed Tristar or the Douglas 10? If so, why don't they fly them? Why do all international lines except Russia fly American planes? Why does no other land on earth even consider putting a man or a woman on the moon?

"When the Americans get out of this bind... as they will... who could blame them if they said 'the hell with the rest of the world'. Let someone else buy the bonds, let someone else build or repair foreign dams or design foreign buildings that won't shake apart in earthquakes.

"When the railways of France, Germany and India were breaking down through age, it was the Americans who rebuilt them. When the Pennsylvania Railroad and the New York Central went broke, nobody loaned them an old caboose. Both of them are still broke. I can name to you 5,000 times when the Americans raced to the help of other people in trouble.

"Can you name to me even one time when someone else raced to the Americans in trouble? I don't think there was outside help even during the San Francisco earthquake.

"Our neighbours have faced it alone and I am one Canadian who is damned tired of hearing them kicked around. They will come out of this thing with their flag high. And when they do, they are entitled to thumb their noses at the lands that are gloating over their present troubles.

"I hope Canada is not one of these. But there are many smug, self-righteous Canadians. And finally, the American Red Cross was told at its 48th annual meeting in New Orleans this morning that it was broke.

"This year's disasters... with the year less than half-over... has taken it all and nobody... but nobody... has helped."