Today's honoree is the third in what's turning into a 4-part series-within-a-series on people who made a difference following the September 11, 2001 terrorist attacks. I had no intention of doing a 4-part series in the midst of my Lenten 40 project - it just happened. That's not to say, though, that I'm sorry it turned out this way. I'm not. All four - President & Mrs. Bush, Rudy Giuliani and tomorrow's yet-to-be-named person - all deserve to be here, though for different reasons, and they deserve my admiration, respect and compassion for what they had to deal with on that day.

You'll have to come back tomorrow to see who the 4th person is, but for today, let's focus on Rudy Giuliani. 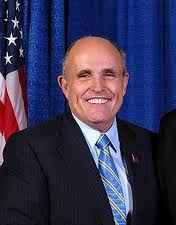 Rudy Giuliani was the mayor of New York City on September 11, 2001. He was not going to be mayor for much longer. In fact, that very day was supposed to be a primary election day for the Democrat & Republican mayoral candidates to choose who would represent each party in the upcoming election. Mayor Giuliani was unable to run again, due to term limits. A New York City mayor, like the US president, can only serve for two 4-year terms, and he had reached that point.

Despite what would happen politically with the mayor's seat in the period after September 11, the important thing was that he was mayor on that day.

Rudy Giuliani was like any of us who woke that day, got up and got on with our lives, expecting it to be more or less like any other day. Not in his wildest dreams did he expect that a few short hours later, he'd be watching the skyline of his beloved city collapse at his feet, taking thousands of innocent people with it.

The following video is of the mayor walking through Lower Manhattan after the planes had struck, but before the towers fell. It is so eerie to see this snapshot in time, and to know now what was unknown then. Just watch...


The first images of the mayor, taking control and communicating to New Yorkers what they needed to do.

The following is a brief video of the first press conference, held that afternoon:


I remember this press conference, especially when he said, "The number of casualties will be more than any, any of us can bear, ultimately..."

This is a longer video, 14 minutes, of a press conference held at 10 p.m. that night:

The story is there, in their faces, their eyes, the shaking of their heads, their sagging shoulders. You can just tell. Minute by minute, hour by hour, the enormity of what had happened was sinking in.

In the days that followed, Rudy Giuliani proved to be up to the challenge of leading the citizens of America's largest city through this unimaginable time.

He visited the World Trade Center site often, taking visiting dignitaries there, and talking with and thanking the Ground Zero rescue and recovery personnel. 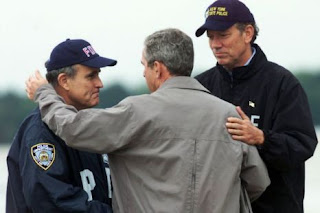 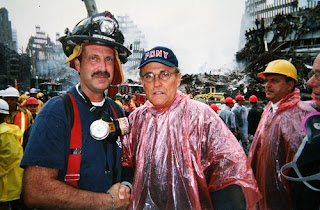 
He went to as many funerals of lost NYPD, FDNY and Port Authority personnel as one person could attend.

His leadership earned him the nickname "America's Mayor", for that was what he was during that period - the leader of the city which was so brutally attacked, yet who was able to rally and encourage and support and guide America as a whole, let alone New Yorkers, who, legend has it, are a difficult crowd to harness!

As mayor of New York City, with his background as a former prosecutor, Rudy Giuliani was credited with having decimated the crime rates of one of America's most notoriously crime-ridden cities. That was a tremendous accomplishment, on its own merits. Add to that his actions of September 11 and thereafter, and one cannot help but be grateful for his leadership.

In the aftermath, Mayor Giuliani attempted to extend his term as mayor by three months, and even tried to eliminate term limits altogether, but in the end, the delayed elections went ahead, and he left the Mayor's Office as originally planned, on December 31, 2001.

He eventually considered running for public office in other capacities - as governor, senator, and actually did run for the Republican presidential nomination in 2008, albeit unsuccessfully. His politics on many issues, particularly social issues, were not necessarily ones with which I agree, but on the issue of what candidate could best keep America safe, and was not afraid of facing down the enemy? He was the one, hands down, in my humble opinion.

He faced a great deal of criticism in the post-9/11 era, on issues ranging from lack of preparedness to emergency communication failures to air quality issues at the site. If this event were to happen today, with the history and lessons learned from 2001 still relatively fresh, then I would accept that all the criticism would be deserved. But no one, no one could have imagined on September 10, 2001, what would transpire the next day, and anyone suggesting the possibility would have been called a fool. Every disaster brings its lessons learned, and what could have / should have been. This one was only different in its magnitude.

Rudy Giuliani was honored by Time magazine as it's "Person of the Year" for 2001. 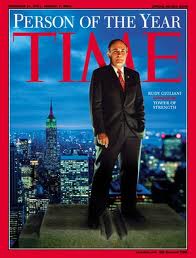 He was also given an honorary knighthood by Queen Elizabeth II.

And I have chosen him as a person worthy of my Lenten 40 list. The honors never end!

I will conclude this tribute with a quote from Mayor Rudy Giuliani:

Your city, Mayor Giuliani, both the people and the spirit of New York, are indeed stronger, thanks to your confident leadership during those darkest of days.