No list of people that I admire and respect would be complete if it did not include my father. 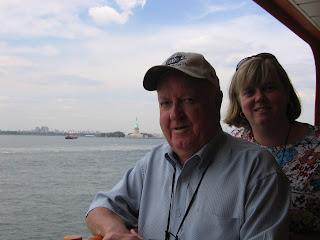 Dad & me on the Staten Island Ferry, NYC, 2005
(Statue of Liberty in the far background)
﻿

As I write this, Dad is two months away from his 93rd birthday. He is in amazing shape for someone that age, and as a nurse who, on a daily basis, sees chronically ill people half his age, I know of which I speak.

A few years ago, Dad realized that he had outlived his own father. Somehow, I don't think any of us will live to see 93, or anywhere close to it!

From my earliest memory until now, in my eyes, Dad hasn't changed a bit. His hair is a little greyer, maybe, but that's it. It's no wonder everyone he meets can't believe he is as old as he is. He certainly doesn't look it. There's nothing that makes his day more than to hear that!

My father was a Chartered Accountant until he retired just a few years ago. Even now, some of his close friends and clients will call him during the tax season to have him pick up their paperwork. At 92, he still doesn't mind hopping in his car to do that for them!

My siblings and I all learned about "tax season" at a very young age. It was the period from January to April 30th each year when Dad was pretty much on the missing list - working morning, noon and night, seven days a week. April 30th, though, was almost as good as Christmas. We'd all stay up late until after midnight, when he'd come home and we'd order out for Chinese food from Hong's Take-Out on Torbay Rd, and usually get it all for free. YUM!!

It was also hockey season during that January to April period, and at the time, Dad watched hockey when he could. I remember that he would buy hockey tickets, little tickets that came in their own little envelopes. The tickets would be based on the time of a goal or a penalty, one second before the goal and one second after, too, if I'm not mistaken. I used to be in charge of the tickets during tax season and I remember calling Dad at the office in the night time with a play-by-play of how his tickets were doing! I must have driven him cracked, but he never let on.

My mother was the disciplinarian, and as she used to say of Dad, "Your father never raised his voice or his hand to any of you". Except Alice. The story lives on about how he said to her once, "Don't you speak to your mother like that, you saucy brat!" She was traumatized!

Mom always felt it was ridiculous to tell us "wait until your father gets home". She was of the opinion, rightly so, that if we were bad, she needed to deal with it there and then, and believe me, she was up to the challenge! I remember many times, calling Dad at the office in tears, telling him how mean Mom was being. He'd ask to speak to her, and as far as I was concerned, Mom was going to be told to be nice to me! I now have no doubt that he probably asked her if she needed milk or anything brought home, and that was that.

I remember many afternoons during the summer when we'd meet Dad as he was driving up the street after work. He'd let us climb up onto the bonnet of the car and drive up the rest of the street with us sitting there, leaning back against the windshield. He'd probably be arrested if he let us do that today!

Staying home sick from school was the best! One call to Dad in the morning, saying "I'm sick..." guaranteed that when he came home for dinner, he'd be bearing fudge sticks and creamsicles and dixie cups and comics. Little Lulu, Casper the Friendly Ghost, and of course, Archie! It's a wonder we EVER went to school!!

Then we grew up and reached driver's license age. He even taught Mom how to drive, and was as calm and patient with her as he was with us, even when she crashed into the garage door! When it came to accidents, Dad was always all about "are you all right", and never "what have you done". Unfortunately, we all gave him way too many opportunities to have to ask us, "are you all right?"

There are a million memories I could write about from childhood...

- The summer holidays to Clarenville, Gander and Corner Brook, which I loved as much as if it was Disneyworld.

- Going to Gander from Clarenville on a Sunday morning to go to Mass.

- Driving out the highway singing "A Bicycle Built for Two".

- The trip on the coastal boat MV Cabot Strait up to Goose Bay and back.

- Bringing him glasses of grapefruit juice when he was building Alice's bedroom downstairs.

- Going to Midnight Mass at the Basilica, all dressed up and sitting in the front pew whle Dad ushered with the Knights of Columbus. I used to love the stories afterwards of how he had to kick the drunks out of the confessionals!

It was a kick, too, to have Mom and Dad come visit me when I lived in Fort McMurray. It was also a wonderful experience to get to go with them to Hawaii, just two years before Mom passed away. I'm so glad we got to do that.

All of us learned to share Dad's love of baseball. It was a thrill indeed to get to go with him and Alice to Yankee Stadium in 2005 and see our team, the New York Yankees play four games. 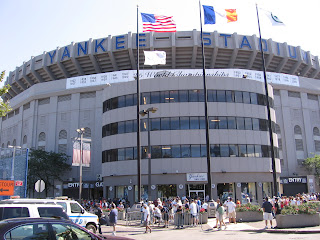 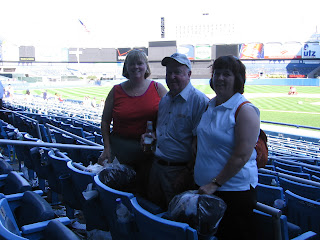 Me, Dad & Alice at Yankee Stadium

It was magic! Wonderful, wonderful memories.

Dad was a great athlete in his own right, having pitched a perfect game for St. Bon's against Mt. Cashel back around 1948. It was a nine-inning game, too, not a wimpy seven-inning game like they play now around town! He also rowed in the Regatta, and played hockey, and whatever else was on the go, enough to earn him the honor of being inducted into the Newfoundland Sports Hall of Fame in 1977, a fact of which we are all very proud!

In recent years, Dad has required my services as a nurse from time to time, and for the most part, he is a very compliant patient. When he's in hospital, the nurses all love him because he never complains, and never asks for anything. He leaves all that to me, to fight the battles! 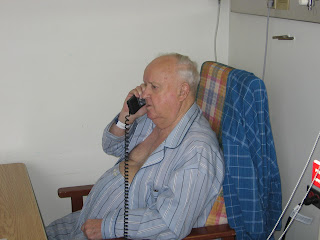 Dad talking to Doug on the phone, after knee replacement surgery. 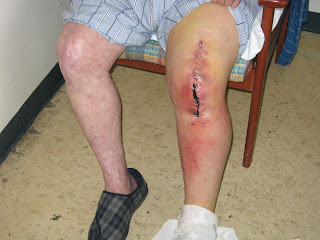 He never complained a bit!!

He's a trouper when he needs a heart bypass, or total knee replacements done under epidural anaesthetic, but he's a big ol' sook when he gets "man flu"!!

As we've been getting older, all of us, we realize how lucky we've been to have a Dad whose been such a positive influence in our lives. He never wavered from the straight and narrow when it came to how he led his life as a husband, father, businessman, athlete, friend, colleague and Catholic. 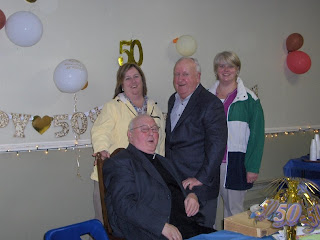 Father John McGettigan (seated) with Alice, Dad and me,
celebrating 50 years in the priesthood.

Trying to live up to that example has varied from difficult to impossible.

He has set for us a standard of honesty and respect that I believe we have all tried to meet, as best we can, with at least modest success, I hope!

I would consider my life a success if he is as proud of me, as I am of him. He is the best Dad ever. 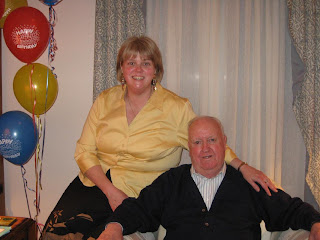