Today, I want to acknowledge Phil Mickelson on my Lenten 40 list, as someone who has earned my admiration and respect.

Anyone familiar with golf will know who Phil Mickelson is, but for those who don't, a brief golfy summary... 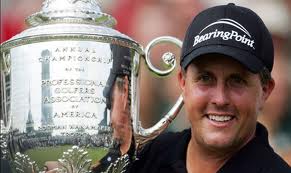 Up until 2004, Phil Mickelson was known as the best pro golfer who had never won a major championship title in 12 years of playing professionally. That dubious distinction soon disappeared, when Phil finally won the Masters Tournament that year. He has gone on to win that particular tournament three times. So far.

As much as I enjoy watching Phil play, and I do, it is not what got him a place here on my list. He is fun to watch, though. No matter how he's doing, really good, or occasionally really bad, he's always smiling. While other, younger, winning-er players look like they were weaned on a pickle if they're not birdie-ing every hole, Phil Mickelson always looks like he's there playing for the love and enjoyment of the game.

That's part of why I admire and respect him, but only a very small part.

The real clincher for me is how he dealt with his wife's - and his mother's - breast cancer diagnosis in 2009.


"On May 20, 2009, it was announced that Mickelson's wife, Amy, was diagnosed with breast cancer, and Mickelson announced he would suspend his PGA Tour schedule indefinitely. She would begin treatment with major surgery as early as the following two weeks. Mickelson was scheduled to play the HP Byron Nelson Championship May 21–24, and to defend his title May 28–31 at the Crowne Plaza Invitational at Colonial, but withdrew from both events." 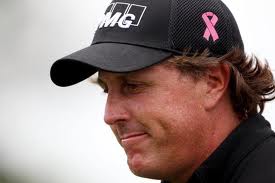 His fellow golfers rallied around the couple at this time:


"During the final round of the 2009 BMW PGA Championship, fellow golfer and family friend John Daly wore bright pink trousers in support of Mickelson's wife. Also, the next Saturday, at the Crowne Plaza Invitational at Colonial, a "Pink Out" event was hosted, and the PGA Tour players all wore pink that day, to support the Mickelson family."

Her doctors advised that the cancer was detected at an early stage. He returned to the Tour in June, only to have his mother diagnosed with breast cancer in July.

In a world where so many treat money and celebrity as the only things worth caring about, it is heartwarming and restores my faith in human nature to know that there are people out there who, despite their wealth and fame, are still able and willing to put their families first. 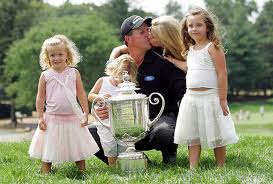 In fact, in 1999, while playing in the US Open, he carried a beeper so he could be notified when his first child's birth was imminent. He stated he was prepared to leave the tournament, even if he was winning. This is clearly a man whose priorities are rock solid. He finished 2nd to Payne Stewart, and his daughter was born the next day.

Not only that... he's one of very few left-handed professional golfers, and being a left-handed golfer myself, I think that's pretty cool, too!! :-)

He and his wife are involved in many charities, and that's very commendable. I'm a believer, though, in the old adage, "charity begins at home". It's evident that Phil Mickelson does, too, and that's the most commendable thing of all.

Here's to your continued success, and your family's health and happiness.