Today, my post is about Burton Winters, a young boy from Makkovik, Labrador, who was lost on the ice for 3 days until his body was found on February 1st. 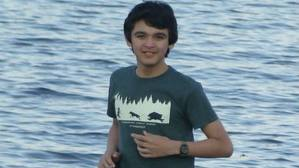 It is not about him alone, but also about how his family and community have not faded away but are actively pursuing changes in Canada's search and rescue capabilities in Newfoundland & Labrador, that have stirred up my compassion, admiration and respect.

I have trudged through the parking lot of the Health Sciences Center during snowy weather, feeling like I was trying to make my way across the far side of the moon. I cannot, for one horrible moment, even begin to imagine what this 14 year old boy endured as he walked 19 kilometers, over 3 days, through a storm on the ice, trying to find his way home. If this story doesn't break your heart, you don't have a heart.

This link will bring you to the CBC's website, to an interactive timeline of events relating to the search for Burton Winters.

The basic story is this: At 1.30 p.m. on January 29th, Burton dropped off his cousin at his grandmother's house in Makkovik. He then got on his snowmobile to go home. This was the last time he was seen alive.

He was reported missing later that evening. His snowmobile was found late in the afternoon on January 31st. His body was found in the morning of February 1st, 19km away from the snowmobile, and 23km away from Makkovik, out on the sea ice.

What happened from a search and rescue standpoint from the time he was reported missing until the time his body was recovered is... I don't even know the words. "Completely unacceptable" is a fair start. "Horrifyingly negligent" fits, too.

For a little background 'flavor' relating to the Canadian Coast Guard's priorities in Newfoundland and Labrador, consider this... on March 12, 2009, when Cougar 491 helicopter was crashing into the north Atlantic 35km off the east coast of Newfoundland with 18 passengers and crew on board, 17 of whom died, THE ENTIRE CONTINGENT OF COAST GUARD RESCUE CAPABILITIES FOR NEWFOUNDLAND AND LABRADOR WAS IN NOVA SCOTIA, FOR TRAINING. All of them. Every helicopter, every person, everything. The province with the longest coastline in Canada, at 28,596km (17,769 miles) was left with NO coast guard rescue capabilities. And people wonder why the thought of calling myself a "Canadian" nauseates me...

Fast forward to January 29th, 2012. When the Joint Rescue Coordination Center (JRCC), in HALIFAX, OF COURSE, (Nova Scotia having a 7,400km coastline) was notified that this boy was missing, it advised that its two helicopters, based in Happy Valley-Goose Bay, Labrador, were out of service. One was being repaired, and one was having a scheduled maintenance check done. A private helicopter joined the search instead.

It seems that once you call the JRCC, and they essentially put you 'on hold', as they did in this case, there is no requirement on their part to follow up to see if their services are still required. It is up to the requesting party, in this case the RCMP in Labrador, to keep calling the JRCC and asking. And asking. And asking. Unbelieveable. This is why they did not join the search for two days. No one called them back to ask them to come, again!! Once, it seems, is not enough.

Canada is an embarrassment.

Then, this guy appears... 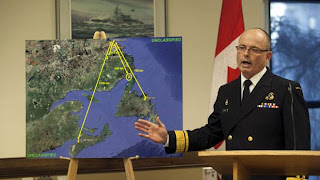 Rear Admiral David Gardam makes his way to St. John's - which up until then he was probably unable to find on a map - to start putting some sort of spin on this debacle.

"Gardam said poor visibility and a low ceiling prevented the military from dispatching a chopper from its base in Happy Valley-Goose Bay, NL, sooner."

So, people, what he's saying is this: if you're going to get lost, plan to do it only on clear, sunny days. They're not up to the challenge.

Can you imagine the AMERICAN Coast Guard coming up with a girlish excuse like that? Not in a million, billion years.

"We have to manage a very large area, and it’s a balancing act on how you manage weather, resources, aircraft availability, crew rest," Gardam said.


So, in case what he's saying is not clear to you, let me break it down... if you're a child lost on the ice, Gardam says they may not search for you because they have a big area to cover, and something else, somewhere else, MAY happen. It doesn't matter that it's ALREADY happening, to YOU.

Adding insult to injury, get a load of this metaphor...

"It is very much like a ballet, and it has to be managed that way."

This man needs to be court-martialed, for that lame, ridiculous statement, alone. It's nothing like a ballet. It's life or death. The life or death of a child. I hope he has nightmares of being lost on the ice for the rest of his pathetic, cowardly life. 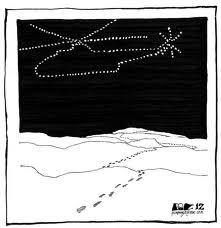 Here is the article from a Halifax newspaper, from which I took these quotes. I didn't make 'em up, folks.

The federal Conservative government would have let this story die if it wasn't for the persistence of the Liberals and the NDP. You have no idea how much it chokes me to admit that, but it is the truth, and the truth must be acknowledged. The non-stop lobbying by the family of Burton Winters has also been instrumental in keeping this tragedy in the public eye.

One change has been forthcoming, that it is now the responsibility of the JRCC, once contacted, to continue to follow up to ensure their services are no longer needed, not to just sit there, painting their nails, waiting for the next call from Newfoundland and Labrador to which they can just say no and get back to their needlepoint.

Appropriately, the federal Liberals and NDP, the provincial Progressive Conservatives and Burton Winters' family acknowledge this as a first tiny step, but are not satisifed that this is all that needs to be done.

The best weapon that Burton Winters' family has is the fact that this child was aboriginal, and the aboriginals of this country have a very strong voice. I just hope it is strong enough. 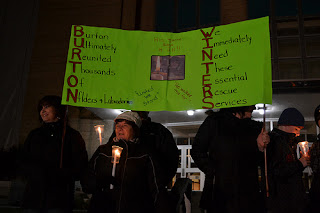 This sign is right - this tragedy has reunited Newfoundland and Labrador. I am certain that there cannot possibly be anyone who lives here who thinks that reducing our search and rescue capabilities is appropriate. It is strictly political, especially in the case of the upcoming closure of the Maritime Rescue Sub-Center in St. John's - which is moving... you guessed it... to Halifax... in that province with the 7,400km coastline.

So, to sum it all up... my heart aches for the loss of Burton Winters and the pain his family are suffering. I hope that they continue their fight to ensure search and rescue for this entire province is at the level it should be, and not part of a 'ballet', where we're constantly afraid that the guy in the tutu is going to land on his (Rear Admiral) arse, again.