Today, it's all about the woman behind the man. 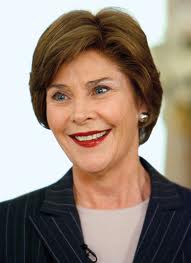 Laura Bush was one of the most (if not the most) popular First Ladies in American history.

While Hillary Clinton spent her White House years positioning herself for her own political ends, and Jackie Kennedy was America's fashionista, Laura Bush took on the role of First Lady and left the world a better place for it.

Laura Welch was originally a school teacher, and later a librarian, having achieved a bachelor's degree in education, and a master's degree in library science. 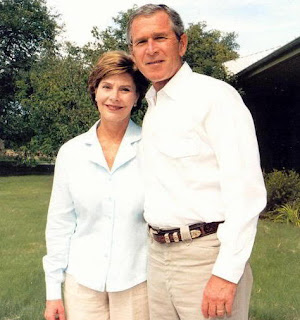 She met George W. Bush at a barbecue held by mutual friends in July, 1977. He proposed in September, and she agreed, saying, "Yes. But only if you promise me that I'll never have to make a campaign speech." They married in November of that same year.

She was not politically active until after her marriage, when her husband ran for Congress. She relented, and did give a campaign speech, her first being on the courthouse steps of Muleshoe, Texas in 1978. He won the primary, but lost the election, but later he became governor of Texas.

In 1981, the couple had twin daughters, Barbara & Jenna, named after their grandmothers. To date, she is the only First Lady to have given birth to twins. 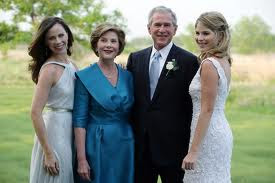 As Texas' First Lady, Laura Bush backed the causes of education and literacy, issues with which she had first-hand knowledge and experience. 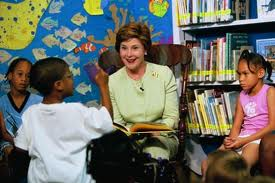 In January, 2001, when she became the First Lady of the United States, she brought those causes to Washington. She also advocated for global health issues, specifically breast cancer and heart disease in women, as well as HIV / AIDS and malaria prevention. 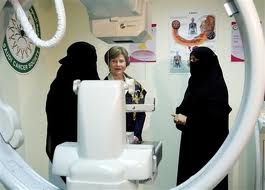 With the Library of Congress, she established the National Book Festival in 2001. 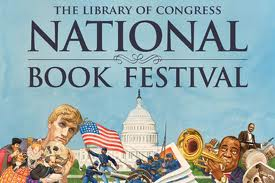 She has been the ambassador for The Heart Truth, a campaign dedicated to raising awareness of women's heart disease, since 2003. 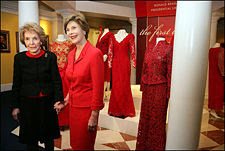 While her husband dealt with the political, domestic, foreign, and military aspects of the terror attacks of September 11, 2001, Laura Bush took on the role of protective mother to all of America, especially America's children.

On the one-year anniversary, she encouraged parents to instead read to their children, and perhaps light a candle in memoriam, saying,

"Don't let your children see the images, especially on September 11, when you know it'll probably be on television again and again — the plane hitting the building or the buildings falling." "


And throughout all this, through her eight years as First Lady, she stood unwaveringly beside her husband, and watched as he was maligned and vilified by the press and others. How incredibly difficult and painful that must have been for her. I suppose she took comfort, as many of us did, in the fact that history would be very kind to her husband, proving him to be among the great presidents.

Along with the causes she vigorously supported, Mrs. Bush also had many pleasant responsibilities as the First Lady. For eight years, she led the Christmas decorating efforts of the White House, deciding on themes and giving media tours. 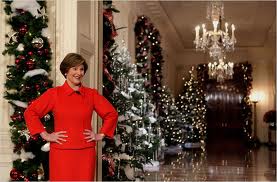 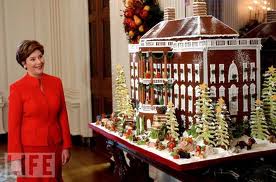 She had the distinction of co-starring in Barney's Christmas Extravaganza, an annual Barney-Cam event, Barney being the Senior White House Pet.


Laura Bush was a quiet, unassuming, elegant, dignified and exemplary First Lady, a model of poise and intelligence and grace, who gave as much to her country as any other individual, in any office.

I ended yesterday's post about her husband with a clip of his humorous remarks at a White House event. I will finish today's post in a similar fashion, with a clip of Laura Bush stealing the show at another White House Correspondents' Association Dinner, in 2005. (Apologies for the poor video quality, but the audio is fine.)

The ability to laugh at one's self and one's situation makes her as real and sweet as any average person, but there was nothing average about this First Lady, and the times and events through which she lived.

Her service to the United States of America, and her efforts for women and children worldwide, makes her a woman who will forever have my admiration, respect and compassion.