I'm three quarters of the way through my Lenten 40 project, and though one might think practice makes perfect, it doesn't! It's getting harder, if anything, but... I will persevere.

The lady who is going to help lead me down the final stretch is Kathy Dunderdale, the 10th premier of Newfoundland. 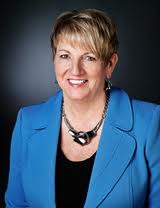 Kathy Dunderdale was sworn in as premier on December 3, 2010, on the same day as Danny Williams resigned.

On October 11, 2011, she became the first female ever elected premier of the province, and only the second-ever female provincial premier elected in Canada.

She was first elected as an MHA back in 2003, (with a little help from me, as I happen to reside in her district), and soon she became one of the more high profile members of Danny Williams' cabinet. In 2008, she was appointed Deputy Premier.

Up until recently, the leaders of all three political parties in Newfoundland were women. I haven't seen anything written about this factoid, yet, but I'm sure it cannot be a common occurrence, assuming it ever happened before, at all.

When Danny announced his intention to resign, there was much wailing and gnashing of teeth. Who could possibly replace him? 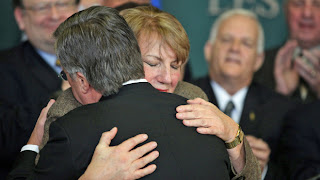 Kathy Dunderdale, the Deputy Premier, was the one who would have that dubious honor. I say "dubious" because it must have been a daunting prospect to take the reins of a party, and a province, that had been led by one of the most popular politicians in Canadian history, even in Newfoundland history, likely even rivaling ol' Joey himself.

Danny had a charisma that few others possess. Even though Kathy Dunderdale does not necessarily possess that same magnetism or silver-tongued-devilishness, she has proven herself to be nobody's fool; a very capable, unintimidatable, quick-on-her-feet, shrewd leader in her own right, not given to being satisfied living in Danny's shadow.

Her determination in making her own indelible mark has caused our Danny some angst, which is good to see. He resigned. Nobody wanted him to, but he did anyway. We, as a province, had to move on without him, and we did. I think in some slightly juvenile way, this upset the old boy. He was not the behind-the-scenes puppeteer that he may have envisioned himself to be.

Her popularity in the polls, while strong, is not what his was, but I'll tell you this... never do I see her being interviewed on TV when I think, "Gee, I wish that was Danny." There are some among us who probably do, but I believe most of us, while eternally grateful for the difference he made, have gotten over him.

Within 12 days of assuming the premier's chair, she resolved a year-long strike involving home care workers in Burin, as well as a dispute with the province's physicians, where 14 had resigned en masse, 13 of whom later rescinded their resignations. She started off with a bang.

And onward we march... The fishery is in a shambles, but the Middle East tensions will resolve long before the fishery is ever fixed again. The Maritime Rescue Sub-Center closing (a federal decision) is creating a lot of debate in the House of Assembly. On the upside, phase one of the Lower Churchill - Muskrat Falls is proceeding with the usual, predictable objections, which time will resolve. The offshore continues to make us all oil sheiks. 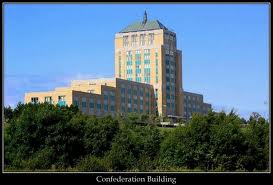 It's all pretty much status quo on Prince Phillip Drive. Actually, it's better than that... I was beginning to think Newfoundland had changed its name to "Have Province" there for a while!

Kathy Dunderdale is forging her place in history, keeping us afloat, and standing on her own two feet - not trying to fill the shoes of The One Who Came Before, but as The One Who Came Next. She's wearing shoes that are going to be equally hard to fill, once she's done with them. We're still in good hands. 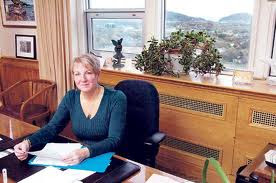