Today, I wish to acknowledge a woman to whom I know I will not do justice: Condoleezza Rice, the 66th United States Secretary of State, having first been National Security Advisor under President George W. Bush. 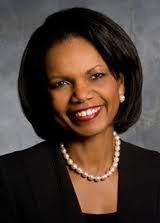 Condoleezza Rice was born in the segregated South, in Alabama, to a Presbyterian minister father and a high school science, music and oratory teacher mother.

She began to learn French, music, figure skating and ballet at the age of 3.

She graduated high school in 1971, and went on to study piano in college. She realized she did not have the talent to play professionally, so considered a new major, in political science.

Despite changing majors away from piano, she is considered an accomplished pianist and has performed in public since her youth. 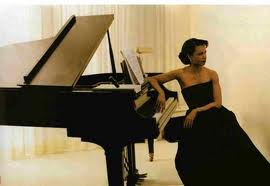 "At the age of 15, she played Mozart with the Denver Symphony, and while Secretary of State she played regularly with a chamber music group in Washington. She does not play professionally, but has performed at diplomatic events at embassies, including a performance for Queen Elizabeth II, and she has performed in public with cellist Yo-Yo Ma and singer Aretha Franklin." 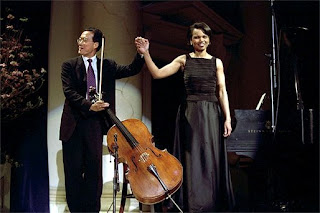 With Yo-Yo Ma after performing together at the 2001 National Medal of Arts and
National Humanities Medal Awards, April 22, 2002

This woman has a list of credentials and accomplishments, half of which I can hardly pronounce. Here's a smattering:

I read this partial list, and find myself mentally exhausted and humbled.

Rice was a Democrat until 1982, when she changed her political affiliation to Republican, in part because she disagreed with the foreign policy of Democratic President Jimmy Carter, and because of the influence of her father, who was Republican. As she told the 2000 Republican National Convention, "My father joined our party because the Democrats in Jim Crow Alabama of 1952 would not register him to vote. The Republicans did."

Condoleezza Rice was the National Security Advisor at the time of the September 11, 2001 terrorist attacks. She recognized that a preventative versus a punitive policy was necessary, as further successful attacks would result in the deaths of hundreds, if not thousands, as it had on that day. Thus, she supported the administration's use of the many information-eliciting tactics that were (and, despite assertions to the contrary, I'm willing to bet still are) employed in Guantanamo Bay, such as waterboarding, forced nudity and stress positions.

As methods of torture go... let me think about which would be preferable - a little session of nekkid waterboarding, or the impossibly horrible unthinkable torture of having to choose between staying in your burning office on the top of the World Trade Center and burn to death, or jumping from the flames to your death. Nothing will ever convince me that waterboarding terrorists is a bad thing. I further think it should be used from time to time at Her Majesty's Pen, but I digress...

She also recognized very early on that communication failures and barriers in the intelligence community made the United States vulnerable. A year before 9/11, she was quoted as saying, "There needs to be better cooperation because we don't want to wake up one day and find out that Osama bin Laden has been successful on our own territory." No, indeed.

She knew that counter-terrorism efforts needed to not only focus on terrorism-supporting nations, governments and organizations, but on ideologies that fuel terrorism.

She is one intelligent, insightful woman.

As Secretary of State, Condoleezza Rice traveled widely and initiated many diplomatic efforts on behalf of the Bush administration. She championed the expansion of democratic governments. Rice stated that the September 11 attacks were rooted in "oppression and despair" and so, the US must advance democratic reform and support basic rights throughout the greater Middle East. Rice also reformed and restructured the state department, as well as US diplomacy as a whole. 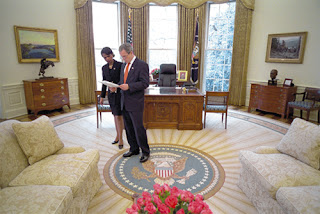 With President Bush in the Oval Office


At the end of her tenure as Secretary of State, Condoleezza Rice returned to Stanford University. There was some speculation that she might run for the Republican presidential nomination in the 2008 elections, but said at the time, "...the one thing that I have not seen myself doing is running for elected office in the United States." What a shame. It is often said that the most qualified people never run for office, and this is a sad example of that.

At only 57 years old, Ms. Rice still has lots of time to change her mind. We shall live in hope. What a remarkable president she would be...