Something's wrong with this picture

As I've written about before, I'm on a ship, near an FPSO, way out in the Gulf of Mexico. I mean way out, like over a hour's flying time out. We're out there.

Yesterday afternoon, I was out on the main deck, when one of the crew pointed out a pleasure boat / fishing vessel that was cruising along, pretty close by. Here is a photo of it: 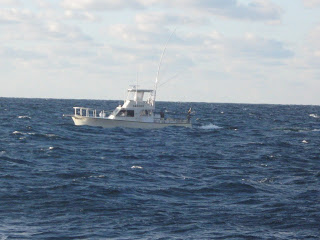 Looks harmless enough. Before too long, though, one of the standby vessels for the field intercepted this boat... 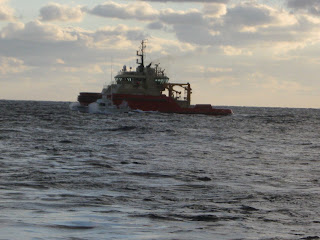 ...and escorted it away from both the FPSO and the ship I'm on. You can see in the next photo just how close this boat came to the FPSO. I took these photos with a crappy little camera, no telephoto lenses, no gimmicks. 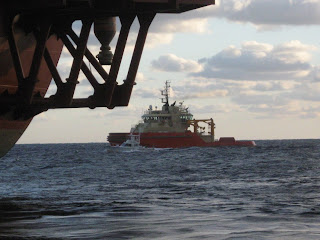 I gotta say... this being a project run mainly by Americans, off the US coast, and this being the post 9-11 world we live in, I was really, really, I mean really surprised that a private vessel could get so close to an offshore installation. I know for a fact that it would never have gotten this close to any of the installations on the Grand Banks of Newfoundland. No way, no how. It would have been warned off at 5 nautical miles, and intercepted at 2 nautical miles off, at the very closest point of approach, and diverted by a stand-by vessel then and there. No messin' around.

It doesn't take much to make a hostile threat look like an innocent little pleasure boat. Just ask the 17 dead sailors of the USS Cole, who were killed in Yemen in 2000 when a small boat came alongside and blew a gaping hole in her side.

One of the American superintendents on board here said at supper last night that he, too, was very surprised that this boat got so close, and that it was so far out into the Gulf. I'm glad that I wasn't the only one who was feeling a tad creeped out by the whole episode.

I mean, when you have to go through the tightest of tight security, bordering on internal exams, to board a plane these days, you'd think that the security of their petroleum installations would be kind of important, too.  I dunno.

On a somewhat lighter note, here is a photo of an oil platform my ship was near when in the Congo last year, with 3 fishermen in a canoe sailing underneath her! 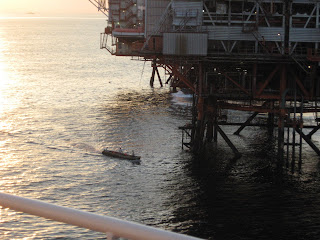 Rightly or wrongly, you kind of expect this sort of thing in the Congo. Not so much in the United States of America. Just sayin'...

And, speaking of airport security, Dianne has again sent me a topical bit of humor to end this with: