Stupid is as stupid does


Thank you, sister dear, for sending this to me. Made my day!!

Y'know what's so great about this? Even when you know what's about to happen, it's still good for an "ohmygod" hysterical laughter moment!

Here are some follow-up facts to this story...

This woman, who's from Pennsylvania, is suing the shopping mall, because the security guards didn't come to her aid for 20 minutes, and by the time they got there, she was gone. In all fairness, it probably took them that long to stop laughing! She was out of the water and gone in less than 20 seconds. What, exactly, were they supposed to do when they got there?

And lady... you MORON - Better that the security guards stayed exactly where they were, keeping an eye out for lost kiddies, instead of going to fish your dumb ass out of a fountain, a fountain, I might add, that you knew was there!!! Did I not already mention that she's an employee of this same mall?!?! No, I don't believe I did.

Someone as dumb as this would be challenged, I suspect, trying to walk and chew gum at the same time, let alone walk and text! I'll bet she has a driver's license, too. Scary thought.

Apparently, she's suing because she's mortified by the incident, and gets uncomfortable talking about it. So how is that the mall's fault?? Lady, you were a stupid idiot! You should be required to have a responsible adult with you when you go outdoors. I bet she'll probably reproduce at some point, too, if she hasn't already. A definite Darwin Awards winner-of-the-future. *shakin' my head*

"A woman who tripped and fell into a mall water fountain is crying foul and looking for someone to sue. But those plans may have to wait, since she's also facing felony charges for theft by deception and receiving stolen property.

Police said Cathy Cruz Marrero allegedly used the credit account of a women she knows to buy more than $4,000 worth of purchases, then another $1,000 of the same person's credit at Target.

Although she vowed to pay the money back between August 2007 and September 2009, court documents say she did not. Neither Marrero nor her attorney would comment about her legal troubles."

Bwa-ha-ha-ha-ha!!! This woman gets stupider by the minute. If you're in a tenuous legal position at the start of your day, the last thing you should be doing is making it worse as the day goes on! Awesome.
Here's a photo of her with dry hair. She looks pretty much like I expected... 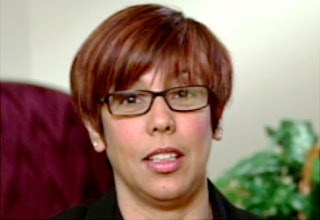 All that's missing is the drool.