Welcome back to the second edition of Mixmaster Monday! 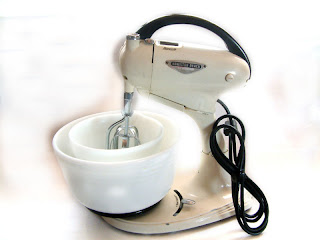 This week, I am featuring a dessert, Sticky Toffee Pudding.

I first came across Sticky Toffee Pudding while watching "Coronation Street". If any of you are from outside the British Commonwealth, then you might not be familiar with Coronation Street. It's an English daily drama set in the fictitious town of Weatherfield, near Manchester, England. This show has been running for over 50 years. It started mid-December, 1960, just a couple of weeks before I was born. I've been watching it now for approximately 10 years. My mother had watched it faithfully from back when I was a little girl. I remember, because the theme music hasn't changed a bit! My father, sister and I still watch it. It's on TV every evening, Monday to Friday for half an hour, but CBC replays it on Sunday mornings, all 2 1/2 hours. I record it when I'm away, and have a Coronation Street marathon when I get home.

But, as I was saying, Coronation St. is where I first encountered Sticky Toffee Pudding. One character in particular, Ashley Peacock, used to mention it from time to time. He hasn't mentioned it lately, though. They must have new writers who don't like it.

At first, I had no idea what it was. The name conjured up all kinds of decadent images that made me very happy! I did an Internet search for it, but all the recipes I came across were so complex that I felt I needed a chemistry set to make it.

Then one day, when I was working offshore Newfoundland, the day cook stopped by for a visit. We got talking, and fortunately, the topic of Sticky Toffee Pudding came up. He had formerly been the chef at a fine dining restaurant in St. John's, The Flake House in Quidi Vidi Village. It ended up closing because of union issues, and very sadly, has never reopened. However, this chef, Byron, had a recipe for Sticky Toffee Pudding that he promised me was authentic, and good, and he was willing to share! So, the following recipe is from Byron.

A couple of years ago, when I was commuting back and forth to Fort McMurray, Alberta, I went into Earl's restaurant there, and lo and behold, there was Sticky Toffee Pudding on their menu! Well of course, I had to have it! I was, however, colossally disappointed. It was basically a dark (spice?) cake with caramel sauce poured over it. I have no idea what it was, but it definitely was not Sticky Toffee Pudding. Not even close. So, if you've had it at Earl's, you haven't had it.

So, without further ado, here is today's recipe!

***Oh, and stay tuned for next week's episode. No recipe next week, it will be a learning experience, instead!!***
.
Posted by Margaret at 10:52 AM