Have you seen this article on the cbc.ca website about a woman from Harbour Grace, Newfoundland, Patricia Regular, who, since last May, has hit three – YES, THREE – moose, and is now in a snit, wanting the government to ‘do something’ about it??
Jesus, Mary and Joseph.
She has written off 2 cars. In 10 months. Hitting 3 moose.
What the hell is this woman still doing with a driver’s license? THAT'S what the government should be doing about it!! They should  be stripping this nutjob's driver's license from her.

My little friend the moose here is wearing sunglasses because he's too embarrassed to be associated with such a dumb story.

She drives back and forth from Harbour Grace to Clarke's Beach for work. There are long-haul transport truck drivers who drive 20 or 30 times what she does in the run of a day, and they're not having that many accidents.
IF they ARE, they're not stupid enough to put their name out there, admitting to being such dangerous drivers.
One thing I just noticed about this article... It says, as I just mentioned, that the accidents all happened between Harbour Grace and Clarke's Beach, yet the latest accident happened on the Conception Bay South highway. A small geographical inconsistency there, methinks. Are they considering Clarke's Beach to be Conception Bay SOUTH? That's ridiculous, if so. But I digress...
So this dame drives, according to Google Maps, 23km to work... 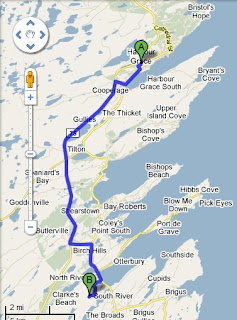 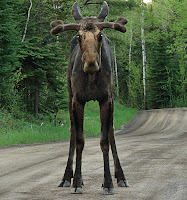 ...in 10 months. Frankly, I'm just plain gobsmacked.
What a nerve for her to demand the government spend MY tax dollars to take action on the moose problem, when it is clearly a Patricia Regular problem? She was stupid enough to say that she had "turned for a second, then bang". THERE'S YOUR PROBLEM, LADY!!! KEEP YOUR FRIGGIN' EYES ON THE ROAD!!!! Dammit all, if I had collided with one, and certainly TWO moose in less than a year, I don't think I'd blink for the whole 23km trip, let alone "turn for a second". She's a moron.
So now all the bleeding hearts will resurrect the notion of building fences and underpasses for the goddamned moose. It's not just the $$$ required to build the fence, you know. We get snow here, lots of it. Fences break, then they'd need repairs. More and more tax dollars being thrown away, when the real, effective solution is ridiculously simple...
SLOW THE HELL DOWN AND KEEP YOUR EYES PEELED WHEN YOU ARE BEHIND THE WHEEL ON THE HIGHWAY.
Moose won't die. People won't die. My taxes will be spent on something legitimate instead.

It's just as stupid as people who blame all the accidents on the Outer Ring Road, on the ROAD!! My personal message to the idiots who say this - It's not the road or the moose!! IT'S YOU!!!!!!!

And, for the sake of argument, what if a fence was built? Does that then mean that the Patricia Regulars of the world are now no longer required to watch out for moose? How high, exactly, do these fences need to be to guarantee no more moose accidents? We get a lot of snow... they would have to be high enough that there is no way that they'll be snow-covered enough for a moose to merely walk over them. Are they going to be strong enough to withstand Newfoundland's winds? Can you say "Wreckhouse"?? The only way that will work is if they build a 45 foot high concrete bunker on both sides of the highway, from St. John's to Port aux Basques. It HAS to be on both sides, of course... can't have moose wandering from one side now, can we? A fence on one side of the highway, and the first accident after that will have the great unwashed masses screaming that the government put the friggin' thing on the wrong side of the road.

AAAARRRRGGGGHHHH!!!!! (That's me, roaring.)
And then, what about moose hunting season? Will the government also have to install gates in this famous fence for the hunters to get in? And issue them all with keys to the locks?

And will they install automatic garage door openers for all the roads that intersect the Trans Canada Highway, so traffic can pass through?

It's all rubbish. Ridiculous rubbish.

The irony of the fence-building is this... building a fence along the whole length of the Trans Canada Highway wouldn't have slowed this mental midget down. She was on the Conception Bay North highway. Sooooo, are we supposed to fence every byway as well?
There have been moose spotted up here in Airport Heights. Does that mean the government are now responsible for fencing my back garden, too? Wicked. 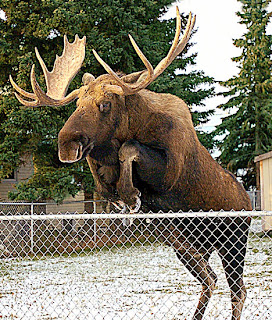 If all else fails, I guess we could teach them to read and obey the rules of the road... 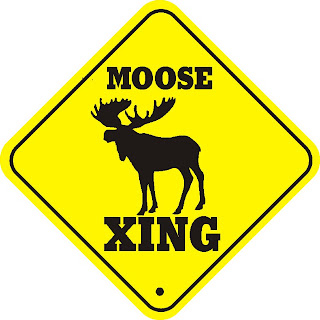 As one commenter at the bottom of the cbc.ca article wrote, "The moose have petitioned the government to keep this lady off the highway." That's about the size of it, too. Some of the other comments are very good, as well. It's good to see that more Newfoundlanders than just me see the lunacy in this whole story.
Posted by Margaret at 8:18 AM