VOCM - "First with the News in Newfoundland", before they even know if it's news

So I got home from work this afternoon, cleared away a bit of leftover snow, got supper on the go, watched a little TV, then checked my email.

I signed up a long time ago to receive breaking news emails from VOCM. I did it for the entertainment value, more than from any sense that I was missing out on any local major events. This IS Newfoundland, after all.

A moose was allegedly chased by a snowmobiler in central Newfoundland over the weekend, and while VOCM, wisely, didn't feel this warranted breaking news status, it still managed to rate a headline on their website... 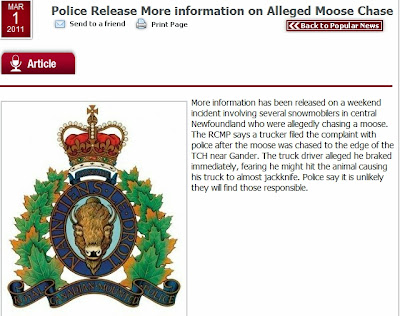 Gripping stuff. How do we cope????
But this afternoon? REAL news. BREAKING news. Something to get the adrenalin pumping. Wicked!!

This is the breaking news email I received. I took a screen shot of it, because unless you receive these emails yourself, you wouldn't believe me, I'm sure -

Yes, faithful reader, you read this right. "Police Responding to Incident in the East End of St. John's". "The RNC says it will provide more details about a POSSIBLE incident..." (emphasis mine)

This is what constitutes a "breaking news" alert by VOCM.
They are so consumed, I suppose, with being "First with the News", that they feel it is reasonable to alert the public when they have no idea what is going on, or if it's more significant than a jaywalker.
I WISH I WISH I WISH I had taken a screen shot of the actual article that appeared on the VOCM website right about this time. It is gone now, replaced with one or two more vague details about what went on, but I swear to God, it went something like this...
"There are reports of two police vehicles in the almost empty parking lot of a business on Stavanger Drive. Bystanders say that an incident in the business is the cause of the business closing for the day."
Again, I swear to God that was the extent of the information that was posted on this "news" website.
Can someone please tell me why they do this? Why not wait a half an hour until there is at least SOME detail of SOMETHING to give to the public? It's not like St. John's is overrun with news organizations that are going to scoop VOCM. If Muammar Qaddafi shows up on George Street tonight, neither CBC nor NTV would likely know about it until they heard it on VOCM.
But no. They hear something's afoot, probably via police scanner, and they trip over themselves to tell you "...something's going on, but we have no idea what. Stay tuned, and if there's anything to tell, we will...".
That's not being "first with the news". That's just being plain silly.
So now, four hours later, this is what's posted on VOCM's website... 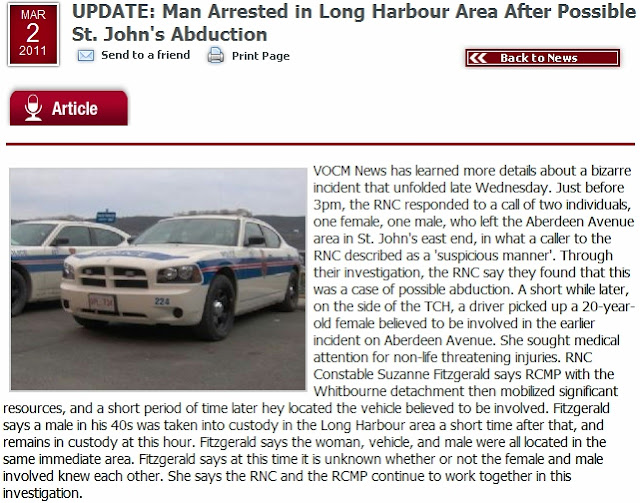 Is it just me, or does this read like something written by a child for whom English is their second language?


At least CBC's "Hear & Now" evening news was willing to let us know that the business that was involved was Princess Auto.
VOCM? Please listen to me. There IS such a thing as trying too hard, and making your-collective-self look ridiculous. This is a prime example of that.
Listen to your scanner, get your ducks in a row and get a reporter on the scene, THEN send an email and post something, WHEN THERE'S SOMETHING WORTH POSTING!!! Even now, four hours later, the details are still so sketchy as to be practically worthless, from a public interest point of view. JMHO...
Posted by Margaret at 9:35 PM